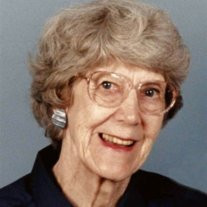 Lillian Ellen Elliott Adams, age 93, died of causes incident to age in Provo on October 19, 2013. Born on Sept. 26, 1920 in Los Angeles to Mary Matilda “Mae” Barnett and George W. Elliott, Lillian was orphaned with her two brothers in her early teens. She was raised by her extended family in her beloved Mother Lode foothills in northern California, and in western Nevada during the Great Depression. She spent her early adult years during World War II in Los Angeles. She married Lierd Elton Grant in Los Angeles on October 20, 1939. They lived in Glendale, California and Galveston, Texas. She worked as a social worker in Riverside County and Amador County in California. Later in her life, she was married to M.A. Adams in Lubbock, Texas, where she lived for 20 years. After her husband M.A. died in 2008, Lillian lived with her daughter in Provo and son in Green Cove Springs, Florida. She enjoyed pursuing family history research and contributed efforts as a family records extraction volunteer, even before becoming a member of The Church of Jesus Christ of Latter-day Saints at the age of 90. She was preceded in death by her brother, Bertrand Eugene “Bert” Elliott and is survived by her brother, Joseph Hamilton (Norma) Elliott, of Green Cove Springs, Florida. She is also survived by two children, Loretta Mae “Lori” (Allen) Palmer of Provo, and Lierd Elliott “Sandy” (Terrie) Grant of Green Cove Springs, Florida. Also surviving are eight grandchildren: Channing Duffy, Bryn St. Clair, Lael Gilbert, Tobias Palmer, Trieste Prusso, Elliott Palmer, Lierd Elliott Grant, Jr., and Ashley Grant; and twenty-two great-grandchildren. Funeral services will be held at 11:00 a.m., Saturday, October 26, 2013 at the Bonneville 10th Ward Chapel, 1498 East 800 South, Provo, Utah. Friends may call at the church Saturday from 10-10:45 a.m. prior to services. Interment, Provo City Cemetery. Condolences may be sent at www.bergmortuary.com.

The family of Lillian Ellen Elliott Adams created this Life Tributes page to make it easy to share your memories.