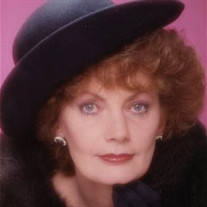 Linda Boyer Clark, age 71, of Payson, Utah, died January 25, 2016 at her home. She was born on September 11, 1944 in Payson, Utah to William Amberly Boyer and Marjorie Carter Olsen Boyer. She married Roger Neil Clark on December 28, 1985 in Payson, Utah. Linda worked in the School Hot Lunch Program and at the Geneva Steel Plant. She worked at Rayloc for 25 years and retired from there in 2010. Recently, she was the crossing guard for the local school. She also sold home decorating for At Home America. Linda loved doing crafts and going to different craft shows. She could out shop us all. She enjoyed high tea and checking out the different tea shops while on vacations. For Linda, family always came first. No matter your struggles, she made you feel important. Her selflessness toward being a mother, grandmother and friend was also commendable. She had the most infectious laugh and you couldn’t help but giggle along with her. She is survived by her husband, Roger, of Payson; three children, Michelle Jenkins, of Payson, Amberlee Jenkins, of San Diego, California, and Bobbie Lane Beddoes, of Payson; three siblings, Becky Boyer Jones, of Littleton, Colorado, Keri Boyer Precourt, of Mesa, Arizona, and Marilyn Boyer, of Muscatine, Iowa; 9 grandchildren and 12 great-grandchildren. She was preceded in death by a son, Jayson Boyer Jenkins. Funeral services will be held at 11:00 a.m., Monday, February 1, 2016 in the Mountain View 7th Ward Chapel, 681 East 500 North, Payson, Utah. Friends may call from 9:30-10:45 a.m. prior to services. Interment, Payson City Cemetery. Condolences may be extended to the family at www.bergmortuary.com.

The family of Linda Boyer Clark created this Life Tributes page to make it easy to share your memories.