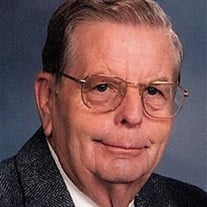 After a long life and a brief illness, Lloyd Earl Henrichsen died peacefully, on January 1, 2016. Lloyd was born December 24, 1922 in Provo, Utah, a son of Edwin and Beulah Giles Henrichsen, the ninth of twelve children born to them. He lived in Provo his entire life except for three years during WWII. Growing up during the Great Depression, Lloyd met life's challenges with courage, faith, and determination. He was a peacemaker in his home. Lloyd attended local schools and graduated from Provo High School in May 1942, during World War II. With great love for freedom and his country, he entered the Army on January 4, 1943. After completing his basic training, he was shipped to England and then Iceland, where he was stationed for nearly two years with the Quartermasters Corps and obtained the rank of sergeant. Lloyd enrolled at BYU in September 1946 on the GI Bill, graduating in June 1950 with a degree in marketing. Lloyd worked for Sears for 35 dedicated years, starting as a salesman, becoming a division manager of several different departments. He retired in January 1983. Lloyd married Elva June Hansen on September 1, l948 in the Salt Lake Temple. He built their first home where the BYU Stadium now stands. He was a loving husband and father. Gentle in nature, with a great sense of humor and a special way with children, he freely shared his philosophies of life. He was dearly loved by his family. His wisdom and skills will be greatly missed. Always interested in Scouting, Lloyd earned the rank of eagle and later enjoyed being a scoutmaster. An active member of the LDS Church, he served as a secretary in priesthood quorums, ward and stake executive secretary, and bishop. He was an ordinance worker in the Provo Temple for over 17 years. Lloyd was an expert gardener. He loved the outdoors, hunting, camping, hiking, fishing, and sports. Every summer he traveled on vacations with his family and spent time with them at Fish Lake in the Henrichsen Family Cabin. He and his wife celebrated their golden wedding anniversary in l998 and their sixtieth in 2008. After retirement, they traveled extensively together throughout the United States, including Hawaii and Alaska; Mexico; Europe; and Canada. He faithfully cared for his wife for several years before her death. He was also preceded in death by his parents; brothers Harold, Roy, Elmo, and Ronald; sisters Amy Klauck, Naomi Crandall, and Helen Adams; and a great-grandson. He is survived by his four children, Lynn (Terumi) Henrichsen, Kirk (Esther) Henrichsen, Janalee (Dale) Bowen, and Diane (Greg) Brown; 13 grandchildren; 28 great-grandchildren; sisters Evelyn Wolsey and Elizabeth Noren; and brother Eldon Rulon. Funeral services will be held at 11:00 a.m., Friday, January 8, 2016 at the Pleasant View 3rd Ward Chapel, 650 East Stadium Ave., Provo, Utah. Friends may call at the Berg Mortuary of Provo, 185 East Center Street, Thursday, January 7 from 6-8:00 p.m. and at the church Friday from 9:30-10:40 a.m. prior to services. Interment will be in the Provo City Cemetery. Condolences may be extended to the family at www.bergmortuary.com.

After a long life and a brief illness, Lloyd Earl Henrichsen died peacefully, on January 1, 2016. Lloyd was born December 24, 1922 in Provo, Utah, a son of Edwin and Beulah Giles Henrichsen, the ninth of twelve children born to them. He lived... View Obituary & Service Information

The family of Lloyd Earl Henrichsen created this Life Tributes page to make it easy to share your memories.

After a long life and a brief illness, Lloyd Earl Henrichsen...

Send flowers to the Henrichsen family.