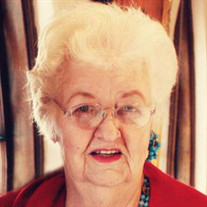 Loanna “Valoie” Hyde Carter was born to Eva Loanna Lauritzen and Raymond Hyde on January 29, 1926 in Salt Lake City, UT. Valoie, her preferred name throughout life, was the second of five children which included Darrel, Raeola, Laurel, & Karen. Early life was dictated by her father’s employment as a miner and rancher and her mother’s duties running a boarding house for up to 45 men. Valoie spent her time tending her three younger sisters, as her only brother passed after only a month of life, as well as assisting with boarding house duties. Valoie often spoke of the hardships of the depression era but said these times, although hard, were a happy time. Apart from learning to play the piano by ear, Valoie and her sisters were recognized as talented singers and were soon found performing on various stages in Nevada and Utah. One such occasion, occurring at the age of 9, found Valoie and her sisters singing for President Heber J. Grant, President of The Church of Jesus Christ of Latter-day Saints. The Singing Hyde Sisters were often heard on the radio and in various entertainment venues around Hollywood, CA. In 1944 Valoie reduced her academic studies to work for Douglas Aircraft as a riveter. Valoie assisted in the war effort by constructing tail sections for the C-47 transport and wing flaps for the A-26 Marauder. Like many women of the time, Valoie proudly wore the manufacturing uniform made famous by Rosy the Riveter. At the age of 17, despite not believing in blind dates, Valoie consented to spend an afternoon at conference where she met the love of her life, Thurlan Kent Carter (TK) of Pima, AR. Valoie and TK fell in love, through letters, and were sealed for time and all eternity on May 15, 1945 in the Mesa Arizona Temple. This union was blessed with two children, Melody Ann and Barry Kent, whom were described by their mother as the very elect of God. Valoie happily served in the Primary, Young Women’s, and Relief Society organizations for the restored Church of Christ while TK worked as a Certified Public Accountant and as the Proprietor of two Shell Oil stations. After Melody and Barry were raised, Valoie and TK worked as domestic help for a wealthy politician in the Whittier California area. Because of her wartime service, Valoie never received a high school diploma. Valoie always thirsted after knowledge which drove her return to education, in her 50’s, to earn a GED. Valoie spent her life trying to lift the spirits of others. Her favorite salutation included the emeritus naming of total strangers as “George” and asking young children if they were “cute little kids”. A mother to many, a true patriot, and a devoted sister, wife, mother, and grandmother, Valoie deeply loved her family and the days of her life were spent in efforts to gather her posterity. Valoie passed peacefully on October 16, 2015 in Provo, UT. She is survived by her daughter and son-in-law (Lynn Bingham), her daughter-in-law (Kristine), 14 grandchildren, 38 great-grandchildren, and 2 great-great-grandchildren. Her body is at rest but her spirit resides in the arms of her sweet husband and her son. Funeral services will be held at 10:30 a.m., Saturday, October 24, 2015 in the Grandview 2nd Ward Chapel, 1081 West 1060 North, Provo, Utah. Friends may call Friday, from 6-8:00 p.m., at the Berg Mortuary of Provo, 185 East Center Street, and at the church Saturday, from 9:30-10:15 a.m. prior to services. Interment will be held at Provo City Cemetery. Condolences may be extended to the family at www.bergmortuary.com.

The family of Loanna Valoie Carter created this Life Tributes page to make it easy to share your memories.