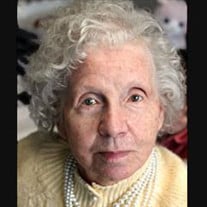 Our sweet, angel mother, Lois Jane Liddiard Lyons, 88, returned to her Heavenly Father on September 14, 2016. She was born on August 8, 1928 in Provo Utah to Orissa Pernella Jolley Liddiard and Raymond Liddiard. She was the youngest of four children. She attended schools in Provo and graduated from Provo High School. She married John Arthur Lyons on November 16, 1946. They were sealed for time and all eternity in the Provo Temple on November 12, 1994. John passed away on January 29, 2010. Lois was a member of the Church of Jesus Christ of Latter-day Saints. She served in the Relief Society Presidency six times and served in the Primary Presidency three times. She served as the Ward Relief Society President of the Edgemont Third Ward and loved to be a visiting teacher. Lois also served as a Blazer Leader and packed 15 boys around in her station wagon going on all kinds of fun adventures. She served as the PTA President for two years and served as a room mother for all six of her children. To Lois, the happiness of her family was the most important thing on this earth. She was proud of her five sons and one daughter. Denis (Sharlene), James (Bonnie), Kelly, Suzy Wakefield (Neil), Bryce (Brandie), and Mick. Lois has 17 grandchildren, 31 great-grandchildren, and 2 great-great-grandchildren. Lois loved working with her hands and creating beautiful articles of clothing. She made pajamas every Christmas for her children and grandchildren. She designed and created beautiful prom dresses, wedding dresses, gorgeous quilts and doll clothes by the hundreds. Lois was a wonderful cook and her favorite activity was having all her children and grandchildren over for holiday celebrations. She loved to garden and had enough produce to hold her own Farmer’s Market. Preceding Lois in death is the love of her life, John Lyons, her son Kelly, Her brothers, Lloyd Liddiard, James Liddiard and her sister Bernice Dunston. Funeral services will be held on Tuesday, September 20, 2016 at 11:00 a.m. in the Cascade 3rd Ward Chapel, 1051 East 200 North, Orem, Utah. Friends may call at the church on Tuesday morning from 10 until 10:45. Interment Provo City Cemetery. Condolences may be expressed to the family at www.bergmortuary.com

Our sweet, angel mother, Lois Jane Liddiard Lyons, 88, returned to her Heavenly Father on September 14, 2016. She was born on August 8, 1928 in Provo Utah to Orissa Pernella Jolley Liddiard and Raymond Liddiard. She was the youngest of four... View Obituary & Service Information

The family of Lois Jane Liddiard Lyons created this Life Tributes page to make it easy to share your memories.

Send flowers to the Lyons family.