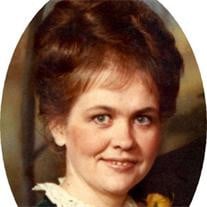 In My Own Words, I was the 10th child of Glen L. Larsen and Reva Kathleen Atherley. Mother wasn't happy when I came along. She was 40 and hoping her child rearing years were over. She thought she would pretend it wasn't so and it wouldn't be... View Obituary & Service Information

The family of Lois Larsen "Poison" Peterson created this Life Tributes page to make it easy to share your memories.