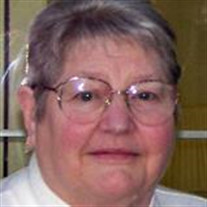 Our mom, grandma, and great-grandma, Lois Platt, passed from this earthly existence at her home in Springville, Utah on Monday, May 13, 2019. She was born in Evanston, Wyoming and raised on her families’ ranch outside of Randolph, Utah. She spent many glorious years (even though she wasn’t convinced it was glorious until many years later) tending sheep, or more accurately reading novels and finding sheep at the end of the day, on the hills around her home. After high school, she left her small town of Randolph and headed for the big city to attend the University of Utah in Salt Lake City. While in school she met a young man, Eugene Platt, that captured her attention and they were married in 1953 after she graduated. Immediately after their wedding in the Salt Lake Temple, Gene enlisted in the United States Air Force and for the next 21 years she followed him from assignment to assignment. During those years they were blessed with two children, a daughter, Alicia, and a son, Edison. In 1969, they moved to Anchorage, Alaska and made that their home for the next 42 years. Lois worked for Providence Hospital for 23 years. She was the first registered mammography tech in the state of Alaska. Even though she loved retirement, she missed the friends she had made. Lois and Gene moved to Utah to be close to their son, Ed and his family, but they still considered Alaska to be their home. Lois is survived by her “perfect son” (her words), Edison and his wife, Donna of Springville, Utah; grandchildren, Christopher Hagensick, Brandon Platt (wife, Sarah), and Hayley Lefler (husband, Tony); great-grandchildren, Sam, Ira, Ashlyn, Charlotte, and Thomas; her sister, Norma Jean Swenor of Jacksonville, Florida; and sister-in-law, Darlene Harris of Cedar City, Utah. She is also survived by many nieces and nephews. Lois was preceded in death by her husband, Eugene Platt, her daughter, Alicia Hagensick, her parents, Henry and Direnda Nicholls, and her brother, Jack Nicholls. Graveside services will be held at 11:30 a.m., Tuesday, May 21, 2019 at the Croydon City Cemetery, Croydon, Utah. The family will receive friends at the Berg Mortuary of Provo, 185 East Center Street, Monday, May 20 from 6-8 p.m. prior to services. Condolences may be expressed at www.bergmortuary.com. The family wishes to thank the angels from Intermountain Hospice: Merilee, Margaret, Brad, and Breanne, for their kindness and professionalism.

Our mom, grandma, and great-grandma, Lois Platt, passed from this earthly existence at her home in Springville, Utah on Monday, May 13, 2019. She was born in Evanston, Wyoming and raised on her families&#8217; ranch outside of Randolph, Utah.... View Obituary & Service Information

The family of Lois Janette Nicholls Platt created this Life Tributes page to make it easy to share your memories.

Our mom, grandma, and great-grandma, Lois Platt, passed from...

Send flowers to the Platt family.