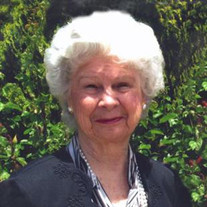 Lola Durfee Jenkins passed away peacefully October 23, 2016 at age 96 in her home surrounded by family. Lola was born February 5, 1920 in Aurora, Utah to LeGrande Durfee, Jr. and Sena Alima Sorensen Durfee. She was the oldest child of five children. She married Ronda Hardie Jenkins in the LDS Salt Lake Temple on December 20, 1946. She was preceded in death by her husband, parents, all four siblings, and 1 granddaughter. She is survived by her four children, Janeice (Fred Benson), Jerelyn (Jonathan Gardner), Bruce (Margaret Hyde) and JuLee (Curtis Harper), 25 grandchildren, and 58 great-grandchildren. In 1940 Lola received a scholarship to Snow College where she earned an Associate degree, played on the women’s basketball team, and enjoyed acting in theater productions as a member of the Thespian Club. She received her teaching certification in 1941, B.S. degree in Elementary Education in 1947, and Master’s Degree in 1969, all from Brigham Young University. A member of Delta Kappa Gamma, an International Women Educators association, she taught third, fourth and fifth grades for 33 years in Sevier, Granite, and Provo School Districts where she was a pioneer in the Remedial Reading Program. Her final years of teaching were at Wasatch Elementary School. She was known for her motivating bulletin boards, her Patriotic Programs, Education through Music, and many other integrated activities which enriched and inspired her students. She was a dedicated, professional teacher who loved children and encouraged them to achieve their greatest potential. After retiring, she and her husband served for 15 years as Family History missionaries and ordinance workers at the Provo Temple. A devoted mother, an obedient and faithful disciple of Christ, her greatest joy came from watching her children and grandchildren raising righteous families of their own. Funeral services will be held at 2:00 p.m., Saturday, November 5, 2016 at the Oak Hills 7th Ward Chapel, 1038 North 1200 East, Provo, Utah. Friends may call at the church from 12:30-1:30 p.m. prior to services. Interment, East Lawn Memorial Hills, Provo, Utah. Condolences may be expressed to the family at www.bergmortuary.com

Lola Durfee Jenkins passed away peacefully October 23, 2016 at age 96 in her home surrounded by family. Lola was born February 5, 1920 in Aurora, Utah to LeGrande Durfee, Jr. and Sena Alima Sorensen Durfee. She was the oldest child of five children.... View Obituary & Service Information

The family of Lola Durfee Jenkins created this Life Tributes page to make it easy to share your memories.

Send flowers to the Jenkins family.