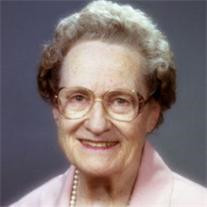 Lola Nielson Smith, 91, passed away 23 December 2012 in Orem, Utah. She was born to Ernest Elbert and Lavina Day Nielson on 5 November 1921 in Hunter, Utah. She was raised there on a farm with five sisters. Lola graduated from Cyprus High School in Magna, Utah, and attended LDS Business College. She filled an LDS mission to the Southern States, where she met Elder Robert Junius Smith. They were married on 5 November 1945 in the Salt Lake Temple. They have 8 children, 40 grandchildren, and 48 great-grandchildren. Besides Provo, which has been home for most of their married life, they have lived in Chicago, Illinois; Bloomington, Indiana; Plainfield, New Jersey; Raleigh, North Carolina; and Jerusalem, Israel. They lived in Israel for 3½ years while Robert was comptroller for the construction of the BYU Jerusalem Center. Lola volunteered several years with Pennies by the Inch. She faithfully filled many positions in The Church of Jesus Christ of Latter-day Saints, including ward and stake Primary president, ward and branch Relief Society president, stake Relief Society counselor, choir director, organist, chorister, and librarian. Together with her husband she filled a mission in the North Carolina Raleigh Mission and also a church service mission at the Missionary Training Center in Provo, Utah. Provo Temple service included 3 years as matron while her husband was president. Survivors include her husband, Robert J. Smith; children Lynette and Greg Lyman, Pleasant Grove, Utah; Lynn and Donna Smith, Orem, Utah; Shirley and Stephen Ricks, Provo, Utah; LaRae Blake, Pleasant Grove, Utah; Jeanine and Stan Denton, St. Peters, Missouri; Larry and Holly Smith, Ephraim, Utah; and Sheldon and Sarah Smith, Provo, Utah; 40 grandchildren, and 48 great-grandchildren; sisters and brothers-in-law Hugh Sorensen, Carlsbad, California; Leone Sorensen, West Jordan, Utah; Margene and Glen Stringham, Millville, Utah; and Merlin Sorensen, Salt Lake City, Utah. She was preceded in death by her parents, Ernest and Lavina Nielson; sisters Laverne Barben, Alta Sorensen, and Phyllis Sorensen; brothers-in-law Howard Barben and Kyle Sorensen; her daughter Junola Bush; and two sons-in-law, Ben Blake and Chuck Bush. The family wishes to thank the staff of Summerfield Manor and VistaCare Hospice, as well as Berg Mortuary, for their services. Funeral services will be held Saturday, 29 December 2012, at 11:00 am at the Sharon East Stake Center, 2400 North 1060 East, Provo, Utah. Family and friends may visit on Friday, 28 December 2012, from 6:00 to 8:00 pm at the Berg Mortuary, 185 E Center St, Provo, Utah, and on Saturday, 29 December 2012, from 9:30 to 10:45 am at the Sharon East Stake Center prior to the service. Interment will be in the East Lawn Cemetery. In lieu of flowers, donations may be made to the Perpetual Education Fund or Pennies by the Inch. Condolences may be extended to the family through her obituary at www.bergmortuary.com.

Lola Nielson Smith, 91, passed away 23 December 2012 in Orem, Utah. She was born to Ernest Elbert and Lavina Day Nielson on 5 November 1921 in Hunter, Utah. She was raised there on a farm with five sisters. Lola graduated from Cyprus High School... View Obituary & Service Information

The family of Lola Smith created this Life Tributes page to make it easy to share your memories.