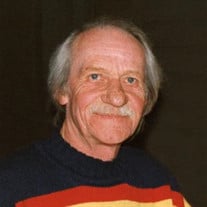 Lonie A. James, age 80, peacefully passed away Wednesday, May 2, 2018 in Provo, Utah surrounded by his loving family. He was a devoted and loving husband, father, brother, grandfather, great grandfather, uncle, and friend. He was born October 5, 1937 in Provo, Utah to George Allen James and Dona Burningham and was raised by his grandparents, Joseph and Rose Teasdale. He received his education through the Provo School District, graduating from Provo High in 1955. Lonie married his beautiful sweetheart, Leah Ruth Crowley on February 19, 1959. They worked hard to raise their three children, Reed, Lance, and Lori. His greatest accomplishment in this life was his family. He served eight years in the Utah Army National Guard in the 145th Artillery Group. During his service in the National Guard he had a successful career at Mountain Bell and retired after 38 years of service, at the early age of 55. He loved retirement and being able to spend time with family and friends. He especially loved traveling to San Francisco with Leah. Lonie was an enthusiast of hot rods and drag racing. He was a fan of Von Dutch and had a passion for pin striping, custom car painting, flames, and scallops. A fond memory was restoring a 1965 Mustang Convertible with and for his daughter, which she still has to this day. He donated his 51-year collections of Hot Rod Magazine, Rod & Custom, and Street Rodder, to Bo Huff’s National Hot Rod Museum. He loved the music of Frank Sinatra, Louis Prima, and the James Gang. Lonie was a member of The Church of Jesus Christ of Latter-day Saints. He is survived by his wife, Leah, children Reed (Helen) Brown, Lance (Kimberly) James, and Lori (David) Dyer, sister Dana K. (Kenneth) Mathews, brother-in-law Tom Crowley, ten grandchildren, Austin (Bethany), Sean (Natalee), Whitney (Landon), Alysia (Bryce), Sarah (Andy), Wyatt (Tessa), Cheyene (Brett), Joshua, Makayla, and Madison, and 12 and 1/2 great grandchildren and many nieces and nephews. He will be deeply missed. Lonie is preceded in death by his loving stepfather and mother, Daniel O. and Dona Burningham Eichelberger, and grandparents. Funeral services will be held at 11:00 a.m., Saturday, May 12, 2018 at the Berg Drawing Room Chapel, 185 East Center Street, Provo, Utah. A viewing will be held from 9:30-10:50 a.m. prior to services. Interment, Provo City Cemetery with full military honors. Condolences may be expressed at www.bergmortuary.com.

Lonie A. James, age 80, peacefully passed away Wednesday, May 2, 2018 in Provo, Utah surrounded by his loving family. He was a devoted and loving husband, father, brother, grandfather, great grandfather, uncle, and friend. He was born October... View Obituary & Service Information

The family of Lonie A. "Lum" James created this Life Tributes page to make it easy to share your memories.

Lonie A. James, age 80, peacefully passed away Wednesday, May...

Send flowers to the James family.