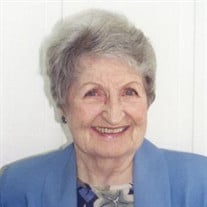 Our loving mother, grandmother, and great grandmother, Lorna Pearl Stubbs Bunnell, passed away February 23, 2015, at her beloved home surrounded by her children. She was born August 6, 1920, to Wilford R. and Hannah Pearl Stubbs. She was the third child of a loving close family of six children, who lived on a beautiful fruit farm at the foot of the mountains in Edgemont, Provo. She attended the Mountain School in Edgemont and later attended Lincoln High School where she met the love of her life, LaMar D. Bunnell. Over the next several years they participated in school activities and school dances. They loved to dance. The Depression did not daunt their spirits and they decided to marry, choosing June 18, 1937, for their big day. They were married in the front room of Lorna’s home surrounded by family. They moved into a small home on the family farm and later purchased a new home in one of the first subdivisions, Christsteel Acres, in Orem. Their family was growing so they purchased property on the Edgemont bench and built their beloved home. Here they reared their family. They were blessed with five children, Gary LaMar (Jacqueline Noble), Craig (deceased), Ann (Russell Judkins), Peggy (Richard Beesley), and Bret (Kris Wellesley). Another dream was fulfilled on December 1, 1954, when she and LaMar were sealed in the Salt Lake Temple and had their family sealed together for time and eternity. She built her happy life around family, the gospel, and friends. She was a true homemaker devoting her time and talents in making a heaven on earth for her family. Activity and service in the gospel of Jesus Christ was important to her and continued throughout her life right to her death. She is survived by her sisters, Donna Bunnell and Fay Kitchen, three children, twenty grandchildren, thirty eight great-grandchildren, and one great-great-grandchild, all of whom felt loved and cherished by her and loved and cherished her. She was preceded in death by her husband, LaMar, her sons, Gary and Craig, and her siblings, Erma Heeg, Stanley Stubbs, and Carol Allen. Funeral services will be held at 11:00 a.m., Friday, February 27, 2015 at Edgemont 6th Ward Chapel, 4056 Timpview Drive, Provo, Utah. Friends may call at the Berg Mortuary of Provo, 185 East Center Street, Thursday evening from 6:00-8:00 p.m., and at the church Friday, from 9:30-10:30 a.m. prior to services. Interment will be at the Provo City Cemetery. Condolences may be sent online at www.bergmortuary.com.

Our loving mother, grandmother, and great grandmother, Lorna Pearl Stubbs Bunnell, passed away February 23, 2015, at her beloved home surrounded by her children. She was born August 6, 1920, to Wilford R. and Hannah Pearl Stubbs. She was the... View Obituary & Service Information

The family of Lorna Pearl Stubbs Bunnell created this Life Tributes page to make it easy to share your memories.

Send flowers to the Bunnell family.