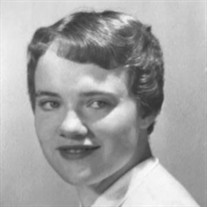 Lorraine Sonzini McGuire was born August 22, 1934 in Salt Lake City, Utah to Hazel Clark and Andrew Francesco Sonzini. She passed away September 25, 2021 in Provo, Utah. She was the oldest of three children and grew up in South Salt Lake, attending Woodrow Wilson Elementary, Granite Junior High, and Granite High School. She briefly studied nursing at the University of Utah and then transferred to Brigham Young University and completed a degree in elementary education, minoring in both music and art. She married E. Patrick McGuire on September 26, 1958 in the Salt Lake Temple. Together, they had four children. She taught elementary school for a few years before and after marrying and then stayed home to take care of her children and support her husband. She served well in many church callings, PTA, and several community organizations. Family was important to her. Her Italian heritage and pioneer ancestors were a source of pride. She remembered and shared detailed stories about her parents, grandparents, and others right up to the last days of her life. She once said that watching her children, grandchildren, and great-grandchildren discover themselves and what they would do in life was a considerable personal pleasure. Her kind and generous nature revealed itself in many ways. She knitted and donated over 500 pairs of mittens (once she started counting). Since she believed that you get more heavenly credit for things you do not brag about, she asked that the sweaters, hats, and scarves she knitted and donated not be mentioned. So don’t tell her we told you. She often gave and loaned money to family, friends, acquaintances, and strangers for medical expenses, appliances (especially refrigerators), higher education, artwork, missionary service, and many other things. She felt guilty about not being able to help more. She served in other ways also. She listened well. While she often offered help, she rarely offered advice. When she did, however, it was always well thought out and generally correct. She wanted her obituary to mention that she was a cruciverbalist (an aficionado of crossword puzzles). She loved completing crossword puzzles in pen, and had a broad, and often surprising, vocabulary that her family delighted in and shared with her. She also learned many small facts that she enjoyed sharing with anyone who would listen. Good food and good conversation were important to her. Conversations up to and past the end of her life were filled with tears and laughter. She loved talking with others and hearing their stories. When people visited, she often found a connection she delighted in reporting to family. (He was the son of your German teacher!) She would sing in any choir that would have her and was a long-time member of Utah Valley Choral Society. Requiems by Mozart and Faure were special favorites. She delighted in small things. New foods, green olives, flowers from a garden or weed patch, good stew, Ben and Jerry’s Cherry Garcia, a disproportionate pumpkin, a funny cat video, lovely fabric, beautiful art, and soft yarn. She was a cheerful and artistic woman. Her handwriting was exquisite. She felt it important to maintain because she taught handwriting to children as an elementary school teacher for several years. Her artistic ability was evident in intricately designed Christmas stockings, funny stick figure cartoons, excellent visual aids, and a variety of beautiful handwork. Gifted teaching was a talent and obsession she passed on to many of her descendants. Three of her four children became teachers, as well as half of her grandchildren. Generosity shined through until the end. Her final requests were thoughtful considerations for others. She left nothing undone except a crossword puzzle and pair of mittens she was knitting. Her body served her well right to the end and let her go when it was time. She is survived by four children, Sidney Kay McGuire Brown (Harold), Andrew John McGuire (Kathleen), Mary Jane McGuire, and Erin Kathleen McGuire; six grandchildren, Hazel Hatch (CJ), Hannah Lewis (Dow), Patrick Brown, Melinda Stephens (Cliff), Michael McGuire, and Shannon McGuire; and ten great-grandchildren. She is survived by her brothers Ralph Sonzini (Dianne) and Clark Sonzini. She was preceded in death by her parents and her husband. Funeral services will be held at 12:00 noon, Saturday, October 2, 2021 at the North Park 2nd Ward Chapel, 1066 West 200 North, Provo, Utah. Friends may call at the Berg Mortuary of Provo, 185 East Center Street, Friday, October 1, from 6-8:00 p.m. and at the church Saturday, from 11-11:45 a.m. prior to services. Interment, Salt Lake City Cemetery. Masks are required. Condolences may be expressed to the family at www.bergmortuary.com. Join Zoom Meeting https://usu-edu.zoom.us/j/87452823315?pwd=S0FLUEx6RnI1OU54WGZXU3J4enRkUT09

Lorraine Sonzini McGuire was born August 22, 1934 in Salt Lake City, Utah to Hazel Clark and Andrew Francesco Sonzini. She passed away September 25, 2021 in Provo, Utah. She was the oldest of three children and grew up in South Salt Lake, attending... View Obituary & Service Information

The family of Lorraine Sonzini McGuire created this Life Tributes page to make it easy to share your memories.

Send flowers to the McGuire family.