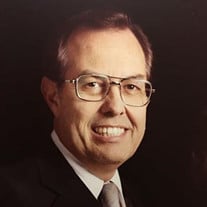 Louis Eugene Crandall (Lou) peacefully completed his mission on earth September 11, 2016 in Provo, Utah. He was 87. His life of service and accomplishment began July 27, 1929 in Mesa, AZ. Born to Louis Packer Crandall and Louise Marie Crismon, he married Mabel Jane Austin on July 9, 1950 in Mesa, and was later sealed in the Mesa LDS Temple. Mabel died June 30, 1998. He married Marie Creviston Dec. 10, 1999. She died June 16, 2012. This incredibly talented man began a career as a commercial artist and marketing entrepreneur. He attended Arizona State University. Among many ventures, he created Legend City an amusement park in Tempe, AZ, a full-service advertising agency, a world travel company and The Crandall Historical Printing Museum. He moved his family from Phoenix to Provo in 1964 and dedicated himself to community projects like the America’s Freedom Festival at Provo, the Boys and Girls Club, the Boy Scouts and more. Always cheerful and charitable, he gave everything he had for others. He touched thousands of lives. He was an active and faithful member of the Church of Jesus Christ of Latter-day Saints serving in many callings. His final testimony to the world was to create a printing museum to bear witness to the miracle of printing the scriptures. He is survived by his children: Janie Hjorth (the late Don Hjorth), Mary Louise “Mem” Bryan (the late Kim Bryan), Annette Olson (Gordon), Ruthie Dangerfield (Bart), and Louis Crandall Jr. (Lisa); 18 grandchildren and 53 great grandchildren. He was preceded in death by his parents, both spouses, one brother, Robert Crandall and two great grandsons, Logan Jackson and Crue Crandall. Funeral services will be held at 1:00 p.m., Saturday, September 17, 2016 at the Bonneville Stake Center 85 South 900 East, Provo, UT. Friends may call at the Berg Mortuary of Provo, 185 East Center Street, Friday, September 16 from 6-8:00 p.m. and at the church Saturday from 11:00 a.m-12:30 p.m. prior to services. Interment, East Lawn Memorial Hills. Condolences may be expressed at www.bergmortuary.com. In lieu of flowers, the family requests donations to the Crandall Historical Printing Museum at any Zion’s Bank location.

The family of Louis Eugene Crandall Sr. created this Life Tributes page to make it easy to share your memories.

Send flowers to the Crandall family.