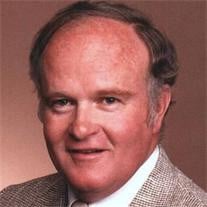 Louis Gar Reinwand, 69, returned home to his Heavenly Father, April 27, 2011 after losing his valiant battle with liver disease. He passed away peacefully at home surrounded by family that loved him. Louis was born July 17, 1941 in Butte, Montana to John Louis and Selena Adams Reinwand. Montana shaped Louis into a strong willed man, and he always had a bit of "Butte" in him. He served the Lord on a mission for The Church of Jesus Christ of Latter-day Saints in the Western Canadian Mission. After returning home he attended BYU, where he earned a bachelor's degree in history and masters' degrees in history and library science and met his lifelong sweetheart, Lane Spencer Smith. They were married in the Oakland, California LDS Temple on November 25, 1967. They enjoyed more than 43 years of marriage, and were the loving parents of five children, in-laws to four daughters and one son, and grandparents to seven granddaughters and six grandsons. Louis was a fiercely loyal husband, father, grandfather, and friend. He had the ability to make everyone he met a welcome part of his life. His concern, love, and interest over those he loved were unmatched. Despite being a skilled collector of the many things that interested him, the love of his family and their successes were his most prized possessions. Louis' love of reading and books led him through a career that satisfied both his personal interests and professional ambitions. He most recently enjoyed working at the Utah State Library. His ancestors brought him great joy and he made genealogy a personal endeavor. He learned detailed stories and histories of his family that had gone before. We are confident this made for the most joyous of reunions upon his passing. Louis was light hearted and his sense of humor carried him through life's many challenges. He battled different health issues for the past several years, but rallied back and kept fighting a heroic fight. We are so proud of him and the way he undertook the challenges in his life. He was preceded in death by his parents. He is survived by his loving wife, Lane Spencer Smith Reinwand, his sons Cole, Tyler (Stevie), Scott (Sarah), Mack (Katy), daughter, Amy Dansie (Mitch), and 13 grandchildren. Brothers, Jack and Bill, and sister, Connie (Riley). Funeral services will be held at 11:00am, Monday, May 2, 2011 at the Edgemont 7th Ward, 555 East 3230 North, Provo, Utah. Friends may call at the Berg Mortuary of Provo, 185 East Center Street, Sunday evening from 6 until 8 and at the church Monday from 9:30-10:45am prior to services. Interment, Tooele City Cemetery. Condolences may be sent through www.bergmortuary.com or [email protected]

Louis Gar Reinwand, 69, returned home to his Heavenly Father, April 27, 2011 after losing his valiant battle with liver disease. He passed away peacefully at home surrounded by family that loved him. Louis was born July 17, 1941 in Butte, Montana... View Obituary & Service Information

The family of Louis Reinwand created this Life Tributes page to make it easy to share your memories.

Send flowers to the Reinwand family.