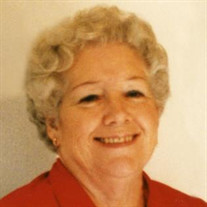 Louise L. Rasmussen Kelsey Myers, 94, passed away peacefully in the early morning hours of January 1, 2015 at the American Fork Beehive Home in American Fork, Utah. Louise was born in Kaysville, Utah at the old railroad depot on April 8, 1920 to Louis and Clara Jane Levi Rasmussen, “the most wonderful parents you could have.” She was the fifth child of seven. As a child, Louise lived throughout Utah in Soldier Summit, Thistle, Helper, Price, and Salt Lake and as an adult in Orem and Provo. She met and married Keith Kelsey and they had two beautiful daughters and five lively sons. They were later divorced. Louise was not afraid of hard work so she did just that to support her family. She worked many jobs including Barbizon and Signetics where she made many friends that she still has today. Louise met the love of her life, Donald W. Myers, when she was 65 years old and they were married on March 7, 1986 in Provo, Utah and shared “the best seven years of her life.” Don passed away in February of 1993. Louise was an accomplished seamstress, cook and tole painter sharing these gifts with family and friends. Louise was a member of The Church of Jesus Christ of Latter-day Saints where she joyfully served in many callings. Louise is survived by her children: Sherrie Hatfield, Ray Kelsey (Linda), Rex Kelsey (Sherrie), Tim Kelsey, David Kelsey (Peggy); sister, Cleo Davis; step-children, Rick Myers (Rebecca), Robert Myers (Judy) and Jann Burton (Kirk) and many grandchildren, great-grandchildren and great-great-grandchildren. She was preceded in death by her parents, husband, siblings and children: Karen McGee and Brian Kelsey. Funeral services will be held at 11:00 a.m., Tuesday, January 6, 2015 at the North Park 2nd Ward Chapel, 1066 West 200 North, Provo, Utah. Friends may call at the Berg Mortuary of Provo, 185 East Center Street, Monday, January 5, from 6-8:00 p.m. and at the church Tuesday from 9:30-10:45 a.m. prior to services. Interment, Timpanogos Memorial Gardens, Orem, Utah. Condolences may be sent online at www.bergmortuary.com.

The family of Louise L Rasmussen Kelsey Myers created this Life Tributes page to make it easy to share your memories.

Send flowers to the Myers family.