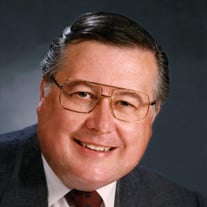 Lowell James Robison, age 74, of Midway, Utah and formerly of Provo, Utah, died on June 1, 2018 in Midway. He was born on May 13, 1944 in Salt Lake City, Utah to Lenard Doyle Robison and LaVon Irene Wade Robison. Lowell spent most of his childhood and teenage years in Nevada. He graduated from Reno High School and later graduated from Brigham Young University with Bachelors degrees in accounting, economics and business management. He was a partner with a national CPA Firm for many years and was Vice President of Provo Steel and Supply for many years. He married his sweetheart, Kathryn Wakefield on December 16, 1966 in the Salt Lake LDS Temple. Lowell and Kathy lived in Salt Lake City for seven years, then moved to Provo in 1974, where they raised their three children and lived for 34 years. They moved to Midway 10 years ago. Lowell loved to garden. He grew a large and productive vegetable garden and loved to share what he grew with family, friends and neighbors. He had a teasing sense of humor, loved to laugh and to hear others laugh. He made time to stop and talk with people, to give a word of cheer and a listening ear. He was a faithful member of The Church of Jesus Christ of Latter-day Saints. He held many leadership positions and enjoyed a lifetime of Church service. As a young man, he served a full-time mission to the Southeast Mexican Mission, and later returned with his wife Kathy to serve as a Mission President in the Mexico Leon Mission. He had a great love for the Mexican people and their culture. No matter what Lowell was called to do, he put his whole heart and soul into the service he rendered. He will be greatly missed by all who really know him. Lowell is survived by his wife Kathryn Wakefield Robison, of Midway; children, Jeffrey (Heather) Robison, of Phoenix, Arizona, Denise Robison (Christopher Sturdivan), of Olympia, Washington and Gregory (Ellery) Robison, of Pleasant Grove, Utah; seven grandchildren, who lovingly called him “Gramps” and whom he loved and adored, Ryder, Quinn, Levi, Leifr, Indi, Sloane and Beaux. He is also survived by his brother, Norman (Nikki) Robison, of Reno, Nevada. He was preceded in death by his parents. In Lowells’ memory, the family suggests contributions be made to the General Missionary Fund of The Church of Jesus Christ of Latter-day Saints. A graveside service was held at Eastlawn Memorial Hills Cemetery in Provo. To send thoughts and condolences to the family, please go to www.bergmortuary.com. Funeral Directors, Berg Mortuary, 185 East Center Street, Provo, Utah. (801)373-1841.

Lowell James Robison, age 74, of Midway, Utah and formerly of Provo, Utah, died on June 1, 2018 in Midway. He was born on May 13, 1944 in Salt Lake City, Utah to Lenard Doyle Robison and LaVon Irene Wade Robison. Lowell spent most of his... View Obituary & Service Information

The family of Lowell James Robison created this Life Tributes page to make it easy to share your memories.

Lowell James Robison, age 74, of Midway, Utah and formerly of...

Send flowers to the Robison family.