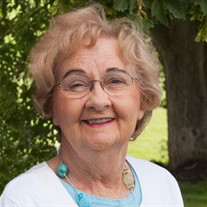 Loye Allred Nelson, 87, peacefully returned home on the morning of Wednesday, September 27, 2017. She was born in Provo, Utah, to Raymond Bliss and Alta Booth Allred on July 3, 1930. Loye grew up on the Allred’s farm in Provo with her parents and two younger siblings, Rey and Janice. She attended Lincoln High, B.Y. High and Brigham Young University, graduating in elementary education. She taught in both Utah and California and adored her fourth graders. Loye met her sweetheart Richard “Dick” Nelson while he was painting her mother’s house. Her mother asked him if he knew her daughter and he did not. She then asked, “Would you like to know her?” The rest is history. They were sealed in the Salt Lake Temple on August 15, 1956. Together they had three children: Kathleen, David, and Kristine. Throughout their sixty-one year marriage, Loye lovingly supported all of Dick’s endeavors, especially his businesses. She had a great sense of humor and never failed to make people laugh. Her grandchildren fondly remember her slipping cash into their pockets with the condition that they didn’t tell Grandpa. Loye had a strong testimony of the restored gospel of Jesus Christ, and was a faithful member of the LDS Church. She is survived by her husband, Dick; her children, Kathy Christensen (Dave), David Nelson (Michelle), Kris Babb (Dave); her sister, Janice Datwyler (Boyd); her siblings in-law, Kent Nelson (Carol Jean) and Helen Nicholls (Byron Pat); her fourteen grandchildren and twelve great-grandchildren. She was preceded in death by her parents and her brother Rey Allred (Mary Carol). The family expresses gratitude to her caregiver Beverly, the staff at Courtyard at Jamestown, and Encompass Hospice for their loving care. Funeral services will be held at 11:00 a.m., Monday, October 2, 2017 at the Edgemont 9th Ward Chapel, 4300 North Canyon Road, Provo, Utah. Friends may call at the Berg Mortuary of Provo, 185 E. Center Street, Sunday, October 1, from 6-8:00 p.m. and at the church Monday from 10-10:45 a.m. prior to services. Interment will be in Eastlawn Memorial Hills. Condolences may be expressed at www.bergmortuary.com.

Loye Allred Nelson, 87, peacefully returned home on the morning of Wednesday, September 27, 2017. She was born in Provo, Utah, to Raymond Bliss and Alta Booth Allred on July 3, 1930. Loye grew up on the Allred&#8217;s farm in Provo with her... View Obituary & Service Information

The family of Loye Allred Nelson created this Life Tributes page to make it easy to share your memories.