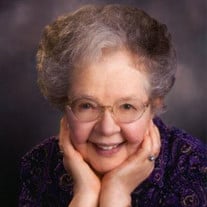 Lucile was born in Redmond, Sevier County, Utah to Sarah Emma Peterson and Louis Christian Nielsen (Nelson). She is the youngest of five girls. They were all raised in Provo. Lucile attended Maeser Elementary School, graduated from Farrer Jr. High, and Provo High School. She attended B.Y.U. While attending Farrer Junior High, she received the State Title for dramatic readings. Lucile also graduated from the Seminary Program of The Church of Jesus Christ of Latter-day Saints. Lucile held many civic positions along with serving in The Church of Jesus Christ of Latter-day Saints. She served on the Women's Council, was a member of the Utah Valley Historical Society, and the Daughters of the Utah Pioneers, and was very active in the scouting program. Most remembered are 21 cubs and den fathers. Among the many recognitions received were the Golden Gleaner Award and the Scouter's Award. Lucile was employed by several local businesses in Provo, including secretary at the Utah Vocational School in Provo, now known as Utah Valley University. She also worked for many years at the Provo Deseret Industry as secretary. On the 27th of October 1945, Lucile married William F. Rawcliffe. They were later sealed in the Manti Temple. They have three boys; William E. (Elke) of San Antonio, Texas, Vern L. (Karen) of Orem, Utah, and Fred M (Jency) of Florida. There are 17 grandchildren and 13 great-grandchildren. A great-great-grandchild is expected in the fall of 20 17. Together, Bill and Lucile served two missions. They also worked in the temple for a number of years. Lucile's passions were to her God and her family, which were interwoven. When grandchildren graduated, quilts were made. Great grandchildren received crib quilts, which were lovingly made. Lucile's life was one of service. There have been many who have been recipients of homemade custard or other treats from her kitchen. Her favorite scripture is John 14:3 ''And if I go and prepare a place for you, I will come again, and receive you unto myself; that where I am, there ye may be also." The family is so grateful for the many friends and neighbors who shared such kind and loving support, especially over the last few months. Thanks are also extended to the staff of Summerfield Manor who took such loving care of her, and ICare Home Health and Hospice. Funeral services will be held at 12:00 noon, Saturday, July 22, 2017 at the Grandview 9th Ward Chapel, 1555 North 1350 West, Provo, Utah. Viewings will be held at the church Friday, July 21 from 6-7:00 p.m. and Saturday from 11-11:45 a.m. prior to services. Interment will be in the family plot in the Redmond Cemetery, Sevier County, Utah. Condolences may be expressed at www.bergmortuary.com. In lieu of flowers, Lucile has asked that donations be made to the Humanitarian Fund of The Church of Jesus Christ of Latter-day Saints.

Lucile was born in Redmond, Sevier County, Utah to Sarah Emma Peterson and Louis Christian Nielsen (Nelson). She is the youngest of five girls. They were all raised in Provo. Lucile attended Maeser Elementary School, graduated from Farrer Jr.... View Obituary & Service Information

The family of Lucile Nelson Rawcliffe created this Life Tributes page to make it easy to share your memories.

Send flowers to the Rawcliffe family.