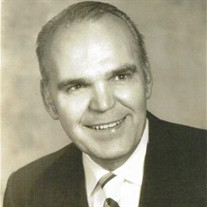 Lynn Gordon Bywater passed away peacefully on July 11, 2016. He was born on November 3, 1921 to Lynn Gordon and Gladys Hatch Bywater, in Salt Lake City, Utah. Gordon began school in 1927 in Montana, and graduated from West High School, Salt Lake City, in 1938. At sixteen, he started at the University of Utah, graduating in August 1942 with a degree in Mechanical Engineering. He remained an avid Ute fan for all of his life. He began his career with U.S. Steel Corporation in September 1942, at the Ironton Plant of Columbia Steel, near Provo. Upon returning from military service, he continued working at Geneva Steel. In 1978, he accepted a position with United States Steel Engineers and Consultants in Pittsburgh, where he worked on projects in Taiwan, Jakarta and Manila. He retired from U.S. Steel in 1982 after 40 years of service. Gordon received a Commission in the U.S. Navy in June 1944 as an Engineering Officer and served with the Amphibious Forces, Pacific Fleet. He was released from Active Duty in October 1946, and joined a Naval Reserve Surface Division in Salt Lake City that same year. In 1959, he accepted a commission in the United States Coast Guard Reserve, and served until 1981, when he retired as Commander with more than thirty-seven years of service. Gordon served in many church capacities, and was a dedicated temple worker at the Provo Temple for more than 20 years. He and Arda also served an LDS Church Mission at the New York LDS Visitor’s Center beginning in July 1986. Gordon was active in a number of pursuits throughout his life; he loved to golf, was on a bowling league for many years, traveled extensively, and was active in many civic organizations. He served as President of the Rotary Club in 1969-70 and President of Riverside Country Club in 1970-71. He was also a member of the Utah Sons of Pioneers and the Elks Lodge. He enjoyed many activities with good friends, loved to dance, and had an easy sense of humor and a ready smile. His grandkids will remember him for being fiercely competitive when playing games, his cookies, and for his example in being hardworking, dedicated and kind to others, even through his last day. He will be dearly missed by those that love and remember him. Gordon married Helen Marie Hoover on September 4, 1948 (deceased 11/12/73); Arda Searle Hendricks on November 26, 1977 (deceased 1/25/88); and Murial Jenkins Heal on November 9,1988 (deceased 6/5/2016). He is survived by his daughters, Terrel and Heidi (Tony), eight grandchildren, fourteen great-grandchildren and one sister, Ida, of Bountiful. The family would like to express our deepest appreciation to the nurses and staff at Jamestown Assisted Living and Comfort WoRx Hospice for their loving and compassionate care of Gordon. Graveside services will be held at 11:00 a.m., Monday, July 18, 2016 at East Lawn Memorial Hills, 4800 North 650 East, Provo, Utah. Family and friends are invited to meet at the cemetery. Condolences may be expressed at www.bergmortuary.com.

The family of Lynn Gordon Bywater created this Life Tributes page to make it easy to share your memories.

Send flowers to the Bywater family.