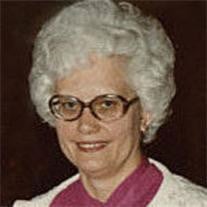 Madge M. Taylor, 86, died peacefully and surrounded by loving family on February 7, 2013, in Provo, Utah. She was born August 20, 1926, in Moroni, Utah, to Leroy Bengt and Anna Caroline Nelson Morley. At the age of 8 Madge moved with her family to Arlington, Virginia. She lived in Northern Virginia for the next 40 years, except for one year near Augsburg, Germany, before returning to Utah for the remainder of her life. She was married to David Glashan Mitchell on January 11, 1947, at the LDS chapel in Washington, D.C. The marriage was later solemnized on July 7, 1947, in the Manti Temple. She and David had four children, Barbara Jean Mitchell of Midvale, Utah; Brian Cary Mitchell of Boca Raton, Florida; Carolyn Mitchell Walker of Alexandria, Virginia; and Tamara Mitchell Wilkinson of Provo, Utah. David died on March 16, 1966. She is survived by her four children, eight grandchildren, and four great-grandchildren. On July 4, 1973, she married Dan Nielson Taylor in McLean, Virginia, and gained three stepsons, Bradford James Taylor of Calgary, Canada; Ronald Dan Taylor of Oxnard, California; and Bruce Malcolm Taylor of Chicago. Dan died on March 28, 2011. She is survived by her three stepsons, another eight grandchildren, and 24 great-grandchildren. Her career years were primarily spent working for the Department of Navy in the Washington, D.C., area. An active member of The Church of Jesus Christ of Latter-day Saints throughout her life, Madge served as Relief Society and Primary counselors and presidents, stake Relief Society board member, and stake Junior Sunday School coordinator. She served a stake mission in Washington, D.C. Madge is also survived by her three siblings, LeRoy Nelson Morley of Tillamook, Oregon; Rachel Morley Hanson of Tucson, Arizona; and Thomas Nelson Morley of Talent, Oregon. Graveside services will be held at Arlington National Cemetery on a date to be determined. Donations can be made to Moroni Elementary School, PO Box 279, Moroni, UT 84646, designate "Playground Fund" on the memo line, or to the American Cancer Society. Condolences may be sent through her obituary at www.bergmortuary.com.

Madge M. Taylor, 86, died peacefully and surrounded by loving family on February 7, 2013, in Provo, Utah. She was born August 20, 1926, in Moroni, Utah, to Leroy Bengt and Anna Caroline Nelson Morley. At the age of 8 Madge moved with her family... View Obituary & Service Information

The family of Madge Taylor created this Life Tributes page to make it easy to share your memories.