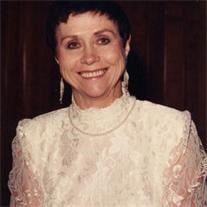 MaeVonne Woolsey Adams was reunited with her family in heaven on December 2, 2010 surrounded by her loved ones. MaeVonne was born in Tropic, Utah to James Emil and Verda Ahlstrom Woolsey on May 1, 1926. They later moved to Provo, Utah where she attended and graduated from Provo High School. She found her first love, Wilford George Adams. They were married January 22, 1945 in San Francisco, California while George was serving in the Navy for World War II. They were sealed in the Salt Lake City Temple in July 1946. They were blessed with three children. MaeVonne held many positions in the church. She served as President over the Eagles Club. MaeVonne also volunteered in the ICU at Utah Valley Regional Medical Center as a Pink Lady for ten years. She was a wonderful, loving grandmother to 5 grandchildren and 9 great-grandchildren. She never missed any performances or an opportunity to celebrate her grandchildrens’ accomplishments. She took great pride in what she loved. She had a passion for music and dancing and met her “sweetie” of eight years, Gerald M. Hanks. They traveled, camped, and loved to watch the Jazz games together. We will be forever grateful for the love and happiness that they shared, and the inspiration shown for one another. MaeVonne is survived by Gerald M. Hanks of Provo, brother: Donald James Woolsey (Florence) of Murray, daughters: Sydney Rose Irwin (Mack) of Texas, Tamara Lyn Prevost (Bud) of Orem, grandchildren: Shon Allen of Draper, Corey (Keri) of Mapleton, Marniee Jolley of Pleasant Grove, Shantale Ferguson of Provo, and Shelby Reynolds (Larry) of Texas, and 9 great-grandchildren. She was preceded in death by her parents: James and Verda Woolsey, son: Jeffrey Lane, her eternal companion: Wilford George Adams, a great-grandson: Dylan Jolley and many numerous relatives. Thank you for your strong examples and your caring ways, we love you! Though gone, never forgotten. Your memory will live on. Funeral services will be held at 2:00 p.m., Tuesday, December 7, 2010 at the Berg Drawing Room Chapel, 185 East Center Street, Provo, Utah. Friends may call at the mortuary, Monday evening from 6:00-8:00 and Tuesday from 1:00-2:00 p.m. prior to services. Interment, Provo City Cemetery. Condolences may be sent to the family through www.bergmortuary.com.

MaeVonne Woolsey Adams was reunited with her family in heaven on December 2, 2010 surrounded by her loved ones. MaeVonne was born in Tropic, Utah to James Emil and Verda Ahlstrom Woolsey on May 1, 1926. They later moved to Provo, Utah where... View Obituary & Service Information

The family of MaeVonne Adams created this Life Tributes page to make it easy to share your memories.

MaeVonne Woolsey Adams was reunited with her family in heaven...