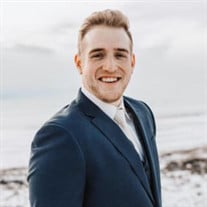 Marcus Daniel Rittmanic was born on January 12, 1993 in Orem, Utah to Matthew P. and Miriam Sandra Rittmanic. He passed away at Utah Valley Hospital the morning of Sunday, October 24, 2021. Marcus would have hated this obituary as he was a no-nonsense kind of guy and definitely would have classified this as nonsense. We know he’s looking down, cringing with every keystroke. His incredible writing skills were unmatched, and our attempts to express the great man that he was, cannot do him justice. Marcus grew up in Provo, Utah with his 6 siblings whom he loved deeply: Ben, Matty, Lauren, Jacob, Aaron, and Ryan. From a young age, Marcus valued getting things checked off his list, one of those things being the completion of his Eagle Scout Project, beautifying Provo’s Nevada Avenue in 2011. After completing the project, Marcus was definitely glad to have it checked off. Marcus genuinely loved to learn by both formal and informal means. He graduated from Timpview High School in 2011 and was in the process of completing his degree in finance at Utah Valley University. He was constantly reading about or watching videos on whatever his curiosity had latched onto. Marcus served a mission for The Church of Jesus Christ of Latter-day Saints from 2012 to 2014 in Poland. He loved the Polish people he served, the culture, and the food. He was a wonderful missionary, loved by all who served with him. His Christ-like example was felt by those he encountered. After taking his sweet time, he met the one person who meant everything to him—Ashlyn. (Marcus would have actually approved of this part). He loved Ashlyn more fiercely and completely than anyone has ever loved. On February 16, 2017 in the Payson Utah Temple, Marcus married Ashlyn, the love of his life, his person, and his joy. The two are expecting their first child, a son, in April of 2022. Without a doubt Marcus would have been a legendary father, but for the remainder of this mortal existence will serve as legendary Guardian Angel. Peace undoubtedly comes with the promise of eternal families and the understanding that all will be made whole. Marcus was a man who backed his words with action. His love for the Lord, the gospel of Jesus Christ, and those around him was obvious. He is remembered as a man of charity, immense love, passion, curiosity, and generosity. Marcus cared for those he loved more than he cared for himself. He was welcomed to his heavenly home by his grandmother Lillian Freese Rittmanic, his grandpa Bernard “Bud” A. Rittmanic, and his grandfather Maurice A. Winter. He is survived by his wife Ashlyn S. Rittmanic (Mills) and their unborn baby boy; his parents Matthew and Sandra; his maternal grandmother Marjorie Clark Winter; his five brothers Ben, Matty (Kylee), Jacob (Mckenna), Aaron, and Ryan; his sister Lauren Jensen (Tanner); and his many loving nieces and nephews. We invite those who knew and loved Marcus to celebrate his life at 11:00 a.m., Saturday, October 30, 2021 at the Slate Canyon 10th Ward Chapel, 1745 South State Street, Provo, UT 84606. A visitation will be held from 9:30-10:45 a.m. prior to services. Interment, Eastlawn Memorial Hills. Following the graveside service, there will be a joyous celebration and feast at the Rittmanic home in Provo. Condolences may be expressed at www.bergmortuary.com.

Marcus Daniel Rittmanic was born on January 12, 1993 in Orem, Utah to Matthew P. and Miriam Sandra Rittmanic. He passed away at Utah Valley Hospital the morning of Sunday, October 24, 2021. Marcus would have hated this obituary as he was a... View Obituary & Service Information

The family of Marcus Daniel Rittmanic created this Life Tributes page to make it easy to share your memories.

Send flowers to the Rittmanic family.