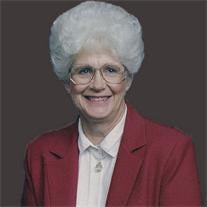 Margaret Jane Dedrickson, our loving wife, mother, grandmother, and great-grandmother, passed away February 18, 2011 in her home surrounded by her family. She was born October 8, 1932 in Provo, Utah to Robert Helmar Keifer and Sadie Lucretia Boswell. She married Fred Larsen Dedrickson on Feb 9, 1951 in the Salt Lake City Temple. They recently celebrated their 60th anniversary the previous week. She is survived by her husband Fred, and four children: Clifton (Margaret) Dedrickson of Hurricane, West Virginia; Susan (Brad) Coil of West Jordan, Utah; Janet (Dean) Blair of Grand Junction, Colorado; Martha (Jon) Lelegren of Sandy, Utah; 13 grandchildren and 10 great-grandchildren. She is also survived by her brother Richard Keifer, of Texas, and many nieces and nephews. She was preceded in death by a daughter, Karen Kay, her parents, her sister Patti Grendell, and a brother Robert Keifer. Jane moved often with her husband and made many friends in New York, Tennessee, Wyoming, Colorado, Arkansas, and Utah. She was a dedicated wife and mother and spent her life caring for them and her extended family. She graduated from Provo High School in 1950. She was an avid genealogist and taught many classes in the community in Hot Springs, Arkansas, as well as in the Church, assisting many others in finding their ancestors. She served in various callings in the Church of Jesus Christ of Latter-day Saints. She received her 25-year service pin for serving in the Primary. She also worked in the Relief Society, was a temple worker at the Provo Temple for 10 years, and at the Timpanogos Temple for 2 years. She and Fred served a mission in the Utah Provo Mission from Feb.1994-Feb.1995. She was a Family History Consultant up until the time her health would no longer allow her to do so. She will be greatly missed by her friends and family. She will be especially missed by her grandchildren who loved to try and beat her at “Jane’s Revenge”. There are many, many wonderful memories that her family will cherish. Funeral services will be held at 11:00 a.m., Tuesday, February 22, 2011 at the Sharon 6th Ward Chapel, 545 South 800 East, Orem, Utah. Friends may call at the Berg Mortuary of Provo, 185 East Center Street, Monday evening from 6 until 8 and at the church Tuesday morning one hour prior to services. Interment, Spanish Fork Cemetery. Condolences may be sent to the family through www.bergmortuary.com. The family would like to extend their appreciation to friends, neighbors, and church members for their many acts of kindness and service during Jane’s illness.

Margaret Jane Dedrickson, our loving wife, mother, grandmother, and great-grandmother, passed away February 18, 2011 in her home surrounded by her family. She was born October 8, 1932 in Provo, Utah to Robert Helmar Keifer and Sadie Lucretia... View Obituary & Service Information

The family of Margaret Dedrickson created this Life Tributes page to make it easy to share your memories.

Send flowers to the Dedrickson family.