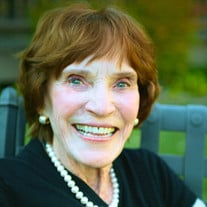 Our beloved mother, grandmother, and great-grandmother, Margaret McConkie Pope, passed away in her sleep July 11 at 1:30 a.m., having lived a full, faithful, and enthusiastic life. A few weeks preceding her birth, Oscar W. McConkie took his wife, Vivian Redd McConkie, to Moab, so that she might have access to a hospital where Margaret would safely arrive to bless their family. She grew up the middle child surrounded by five brothers. Margaret had a delightful childhood, living near grandparents as a toddler, and then later spending summers in Monticello riding horses and swimming in the water hole. When Margaret was three, Oscar and Vivian decided to leave his successful law practice in Monticello and move to Salt Lake City, where their children would receive a better education. That education served Margaret well. Teaching has been in the very fiber of Margaret’s heart for nearly a century. One granddaughter said of her, “Always in teaching mode.” She learned to teach as she was taught in her home by wise and faithful parents. The gospel of Jesus Christ was the primary topic, although Vivian tutored each of her children in math and other subjects. After graduating East High School, Margaret attended the University of Utah where she earned a bachelor’s degree in elementary education and where she met Bill Jordan Pope, who would nurture, adore, and temper her for the rest of eternity. A war bride, Margaret was married to Bill in the Salt Lake Temple on September 10, 1943. Margaret taught school while he was in Japan in the service. She again taught school for three years while they lived in Abadan, Iran. As a fourteen year old, she posted on her mirror a quote from Abraham Lincoln, “I will study and get ready, and perhaps my chance will come.” Throughout her life, she studied the scriptures diligently and many teaching opportunities came. Margaret influenced many testimonies as gospel scholar, a writer, a well-known speaker in the Church, and a missionary on Temple Square. She served as a gospel doctrine teacher for most of her adult life. Her last assignment in that calling was when she was 90 years old. She taught all to “liken the scriptures to themselves.” Her primary goal in life was to bring souls to Jesus Christ, starting with her family. In the home she was often found with her open, well-worn scriptures, and she would usually pause her study to teach her children what she was studying. The President of Brigham Young University invited her to teach a Book of Mormon class, which she did as a volunteer until that program was discontinued and then she was invited to join the religion faculty part time. Margaret was the enthusiastic cheerleader and supporter of her children and her husband; she was a kind and loving mother who never let her children leave the home without a hug, and an “I love you,” or the familiar phrase, “Remember who you are!” Her children had the security and role model of knowing that she loved and adored their father, Bill Pope. She was a church and community event organizer extraordinaire, whose creativity was influenced greatly by diverse cultures and countries, especially Iran. Her children often came home to smells of homemade bread, simmering spaghetti sauce, or some exotic Iranian dish that she prepared just for them. Margaret is survived by her four children, Louis McConkie Pope (Ruth), Leslie Layton (Alan), Kathryn Hoopes Paxman (David), and Margaret Patrice Tew (Wayne); brother, Oscar W. McConkie II, and a large posterity of grandchildren, great-grandchildren, and one great-great-grandchild. She was preceded in death by her parents, Oscar Walter McConkie and Margaret Vivian Redd McConkie; son-in-law, Richard Divers Hoopes (Kathryn); daughter-in-law, Christine Clark Pope (Louis); and brothers, Bruce Redd McConkie, France Briton McConkie, James Wilson McConkie, and William Robert McConkie. Memorial Services will be held at 11:00 a.m., Saturday, July 27, 2019 at the Pleasant View 2nd Ward Chapel, 650 East Stadium Avenue, Provo, Utah. Friends may visit with the family from 9:30-10:45 a.m. prior to services. Interment in the Salt Lake City Cemetery will be prior to the memorial service. Condolences may be expressed at www.bergmortuary.com. “In lieu of sending flowers please consider a donation to BYU Law and Religion."

Our beloved mother, grandmother, and great-grandmother, Margaret McConkie Pope, passed away in her sleep July 11 at 1:30 a.m., having lived a full, faithful, and enthusiastic life. A few weeks preceding her birth, Oscar W. McConkie took his... View Obituary & Service Information

The family of Margaret McConkie Pope created this Life Tributes page to make it easy to share your memories.