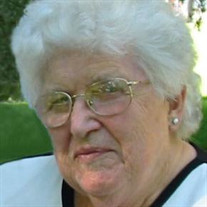 Marguerite Wagstaff Madsen, 96, passed away peacefully at home on April 30, 2015 of natural causes. Marguerite was born Dec 21, 1918, in Salt Lake City, UT to Albert Leland and Josephine Wagstaff. She grew up in a loving, humble, faith-filled home. When she was 6 years old, the family moved to Kamas, UT where she spent her happy childhood on the family dairy farm. She loved to read, write short stories, do needlework, and was a beautiful artist. She attended BYU-Academy and then served an LDS mission to the central states from 1940 to 1941. After her mission, Marguerite taught school for a time and then started working for the LDS church genealogical library. She married Lyman Alfred Madsen on Aug 30, 1946 in the Salt Lake LDS Temple. She and Lyman raised their family in Provo, UT. She was an active member of The Church of Jesus Christ of Latter-day Saints and served in many positions. She was actively involved in 4-H, daughters of Utah Pioneers, scouting, and genealogy. She attended the temple regularly her entire life and worked in the Provo temple for 5 years. Together they served a mission in the Rapid City, South Dakota Mission working with Native American people from 1985 to 1986. She was preceded in death by her parents; her husband, Lyman Alfred Madsen; daughter, Loretta Anne Madsen; one grandson, Nikolas Burton Anderson; and two sisters: Mary Turnbow and Naomi Jackson. She is survived by three siblings: Albert Wagstaff, Josephine Wentz, and Kate Bates. She is also survived by seven children: Gloria Jean Thacker (Nile), Arnold Lloyd Madsen (Dixie), Carolyn May Ash (Larry), Patricia Jo Carbajal (Edgardo), Brian Alfred Madsen (Marcie), Loralie May (Kerry), Anna Martina Anderson (Tim); one foster-daughter, Rosemary Greenwell; 23 grandchildren; two foster grandchildren; 44 great-grandchildren; and one great-great-grandchild. Funeral services will be held at 11:00 a.m., Tuesday, May 5, 2015 at the Mapleton Stake Center, 970 North 400 East, Mapleton, Utah. Friends may call at Berg Mortuary of Provo, 185 E Center Street, Monday from 6-8:00 p.m. and at the church Tuesday from 9:30-10:30 a.m. prior to services. Interment, Provo City Cemetery. Condolences may be sent online at www.bergmortuary.com.

Marguerite Wagstaff Madsen, 96, passed away peacefully at home on April 30, 2015 of natural causes. Marguerite was born Dec 21, 1918, in Salt Lake City, UT to Albert Leland and Josephine Wagstaff. She grew up in a loving, humble, faith-filled... View Obituary & Service Information

The family of Marguerite Wagstaff Madsen created this Life Tributes page to make it easy to share your memories.