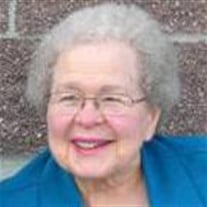 Marian Stratford Hyde Brady, 89, longtime resident of Baker City, Oregon, passed away peacefully at home in Provo, Utah, on May 24, 2015. Marian was born January 24, 1926, in Washington, D.C., the first child of George Osmond and Lona Stratford Hyde. Marian enjoyed a childhood filled with experiences unique to her Washington environment. She was perched on her father’s shoulders in the crowd to greet Charles Lindbergh after he returned from his famous solo flight across the Atlantic. She learned to walk up steps at the Lincoln Memorial and hunted for Easter eggs on the lawn of the White House. She loved the Japanese cherry trees around the tidal basin in Washington and visited monuments and memorials much as children elsewhere might go to a neighborhood park. Although Marian grew up during the Great Depression, her memories of that time were happy ones, filled with extended family associations and church activity. Her parents managed to absorb much of the economic concern of the time to provide their family a sense of stability and security. Her family’s involvement in The Church of Jesus Christ of Latter-day Saints provided spiritual, social, and service opportunities. Marian remained a faithful member of the Church throughout her life. After graduating from high school in 1943, Marian attended Brigham Young University in Provo, Utah, majoring in economics. Since the distance was so great and train fares costly, Marian could not go home for the holiday breaks from school. Christmas Day 1945, Marian met Garn Anderson Brady, recently returned from service in the Naval Air Corps, at a dance in Downey, Idaho, where she was visiting her Hyde grandparents. Marian completed her bachelor’s degree in 1947, and the following year she and Garn were married on July 9 at the LDS temple in Logan, Utah. The city girl thus embarked upon the challenging adventure of life as a farmer’s wife and, in time, the mother of five children: Suzanne, Pamela Ruth, Scott, Robert, and Rebecca. Except for two years in California, the Bradys lived and farmed in Idaho and Oregon, eventually settling in July 1960 in Baker City, where they also opened the first Arctic Circle Drive-In in Oregon (now Burger Bob’s). The drive-in and farming ventures in Baker City apparently kept them too busy to think about moving again, and the family put down roots there. Garn passed away May 8, 2001, and Marian remained in Baker City until November 2012. During a visit with Rebecca’s family in Provo, Utah, Marian became unable to walk due to Parkinson’s disease and needed to remain with them. Her good cheer and determination to find joy in whatever life might bring blessed the lives of a whole new circle of friends and continued to inspire the many family members and long-time friends who visited her there. Marian was preceded in death by an infant grandson, her parents, and her husband of nearly fifty-three years. She is survived by her four sisters and one brother, five children, twenty-one grandchildren, and thirty-five great-grandchildren. The family is grateful to the staff of Sunrise Home Health and Hospice, whom Marian loved as special helpers and as dear friends. Funeral services in Provo, Utah will be Wednesday, June 3, at 1:00 p.m. at the Carterville LDS Chapel, 900 West 2150 North. A viewing will precede the service from 12:00 to 12:45 p.m. Funeral services in Baker City, Oregon will be Friday, June 5, at 11:00 a.m. at The Church of Jesus Christ of Latter-day Saints, 2625 Hughes Lane. A viewing will precede the service from 10:00 to 10:45 a.m. Vault interment will follow at Mount Hope Cemetery. Condolences may be extended to the family at www.bergmortuary.com.

The family of Marian Hyde Brady created this Life Tributes page to make it easy to share your memories.

Send flowers to the Brady family.