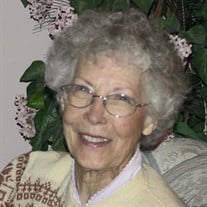 Marian Kingston (age 89) of Provo, Utah died of natural causes on 8/30/2015 while a resident of Legacy House Assisted Living Center in South Jordan. Born on 8/16/1926 to Leonidas Marion Hickman and Winifred Whitehead Hickman in Ogden, Utah. She attended Ogden High School, graduated from then Weber Junior College and later then Utah State Agricultural College in Logan, with a Bachelor of Science in Home Economics. She took a job teaching sewing at Central Junior High School in Ogden. Marian and Richard Dean Kingston married on 10/6/1954 in the Salt Lake City LDS Temple. Together they raised five wonderful children. Marian worked at Ben Snyder’s department store in Lexington, Kentucky; in the Business Affairs Office at the University of Kentucky; as administrative secretary at BYU’s Comprehensive Clinic; and then the Office of Continuing Education at BYU. Service in the LDS church was a constant for Marian, serving faithfully in many ward and stake callings, often assuming leadership roles. Upon retirement, she fulfilled LDS church service missions at an LDS church employment office in Provo, with the Public Affairs Department in the Hosting program on Temple Square, and then in the Joseph Smith Memorial Building. Above all she accomplished and experienced, Marian was a devoted and loving mother, and obedient and faithful disciple of Christ. She was kind to everyone; nary an unkind word crossed her lips. Preceded in death by her parents, two brothers (Renae, Cecil), and former husband. Survived by: her children, Denise Kingston Pahl, Merrill Dean (Cindy) Kingston, Lamont Richard (Diane) Kingston, Kent Leon (Jan) Kingston, and Stephen James (Carmen) Kingston; brother (Winston “Bud” Hickman); 20 grandchildren; and 25 great-grandchildren. Funeral services will be held at 12:00 noon, Friday, September 4, 2015 at the Oak Hills 7th Ward Chapel, 1038 North 1200 East, Provo, Utah. Friends may call from 10:30-11:45 a.m. prior to services. Interment will be in the Provo City Cemetery. Condolences may be extended to the family at www.bergmortuary.com.

The family of Marian Vie Hickman Kingston created this Life Tributes page to make it easy to share your memories.

Send flowers to the Kingston family.