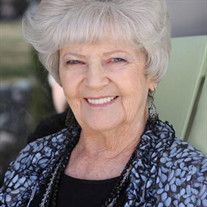 Marian Bird Smoot passed away on December 28, 2016. She was born in Springville, Utah on September 7, 1933 to Maurice Clegg Bird and Mary Elizabeth Williams Bird. She was preceded in death by her parents and her older brother, Wallace, who was killed in a plane accident in 1954. Marian is survived by her sister, Mary Jane Palfreyman, brother, Richard Bird, her husband, L. Douglas Smoot, and daughters: Analee (Scott) Folster, LaCinda (John) Lewis, Michelle (Nathan) Hyde and Mindy (Conor) Robbins. Marian met Doug in the third grade and they attended Springville High School together where she was the Art Queen, member of the Steno club, and a cheerleader. Marian designed and sewed the cheer outfits which were showcased in the Springville Art Museum. She loved to dance, run, play the drums, sew, paint and drive her Dad’s red truck. Doug and Marian graduated in 1952, and on September 15, 1953 they were married in the Salt Lake LDS Temple. They recently celebrated 63 years of marriage. Marian was a faithful member of the LDS church. She served in numerous callings including Relief Society President, Primary chorister and ward photographer. She was a great support to Doug in his many church callings. Marian served as President of BYU Women and on the Provo City Art Board which was responsible for raising funds for the Covey Center for the Arts. Marian loved music and had a beautiful alto voice. She and Doug donated their time, energy and financial resources to various theatre and art foundations, including Tuacahn, the Covey Center and the Springville Art Gallery. Marian also loved sports and cheered for BYU and the Jazz. She enjoyed tennis with friends and played competitively for years. Marian was an excellent homemaker, cook, collector and seamstress. She had a quick wit, a ready smile and a contagious laugh. Marian and Doug traveled the world together, often with family. Her favorite place to be was on row one, the center seat of any activity where her family was involved. Marian is a beloved wife, mother, grandmother and friend. She will be greatly missed by her family, now numbering 62, including 20 grandchildren and 21 great-grandchildren. Marian devoted her life to her posterity and her legacy will live on through them. Funeral services will be held at 1:00 p.m., Thursday, January 5, 2017 at the Oak Hills Stake Center, 925 East North Temple Drive, Provo, Utah. Friends may call at the Berg Mortuary of Provo, 185 East Center Street, Wednesday, January 4, from 6-8:00 p.m. and at the church Thursday, from 11:00 a.m.-12:30 p.m. prior to services. Interment will be in the Provo City Cemetery. Condolences may be expressed at www.bergmortuary.com.

Marian Bird Smoot passed away on December 28, 2016. She was born in Springville, Utah on September 7, 1933 to Maurice Clegg Bird and Mary Elizabeth Williams Bird. She was preceded in death by her parents and her older brother, Wallace, who was... View Obituary & Service Information

The family of Marian Bird Smoot created this Life Tributes page to make it easy to share your memories.

Send flowers to the Smoot family.