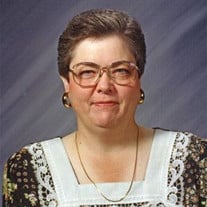 Marianne Miller, (67) of Provo, Utah passed away October 11, 2016 at home. She was born in Urbana, Illinois on June 15, 1949 and spent her early years in Champaign, Illinois, Davenport, Iowa and Wausau, Wisconsin as her father pursued his professional career. At the death of her father in 1955 the family moved to Provo where Marianne resided in the family home until her death. Marianne was preceded in death by her Mother Blanche T. Miller and Father Lowell S. Miller. She is survived by her brothers Sheldon T. Miller (Barbara) Providence, Utah and L. Scott Miller (Elizabeth) American Fork, Utah. In addition she is survived by nieces and nephews Katherine Baldwin (Germantown, TN), Ryan Semerau (Rennes, France), Emily Acosta (Provo, Utah), Chad Miller (Eagle Mountain, Utah), Brandon Miller (American Fork, Utah), James Miller (Provo, Utah), Kathrine Miller (American Fork, Utah) and Sam Miller (Provo, Utah). She also has many cousins, aunts and uncles and great nieces and nephews who survive her and will miss her. She attended Provo schools graduating from Provo High in 1967. She then attended Dixie College for 2 years and then returned home. She then spent 30 years working for BYU as a cashier in the bookstore. She retired at 55 and spent the remainder of her life doing family history work and research and in sharing her days with her great nephews Isaac and Mateo Acosta. These activities brought her great joy and contentment during her retirement. She spent the majority of her life in the Provo, Utah Park Ward where she served in the primary and cub scouts for decades. She was also very active in the Daughters of the Utah Pioneers and treasured her pioneer ancestry. Family was always important to Marianne. Her passion was family history and literally thousands of family names were prepared by her for the temple. She never missed a birthday for any of her assorted family members. Funeral services will be held at 11:00 a.m., Saturday, October 15, 2016 at the Pioneer Village Ward Chapel, 101 West 800 North, Provo, Utah. Friends may call at the Berg Mortuary of Provo, 185 East Center Street, Friday, October 14, from 6-8:00 p.m. and at the church Saturday, from 10-10:45 a.m. prior to services. Interment, Provo City Cemetery. In lieu of flowers please make donations in Marianne's name to the Perpetual Education Fund of The Church of Jesus Christ of Latter-day Saints. Condolences may be expressed to the family at www.bergmortuary.com.

Marianne Miller, (67) of Provo, Utah passed away October 11, 2016 at home. She was born in Urbana, Illinois on June 15, 1949 and spent her early years in Champaign, Illinois, Davenport, Iowa and Wausau, Wisconsin as her father pursued his professional... View Obituary & Service Information

The family of Marianne Miller created this Life Tributes page to make it easy to share your memories.