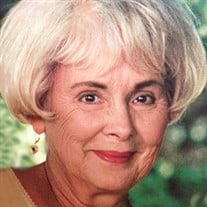 Maridell Lewis Pearson (10/23/1929 -- 6/23/2014) passed away in Orem, UT after a long and beautiful life having been cared for by her children, husband, and others who loved her dearly. She is preceded in death by her parents, Roy and Verdell Lewis and her brother, Richard. Maridell grew up in Mesa, Arizona and was involved in the arts as a girl. She graduated from Brigham Young University and was a theatre major there. While at BYU she met and married J. Raynal Pearson and worked as an elementary school teacher after they moved to Richfield, UT. She and Raynal then moved to California where he served in the air force during the Korean War. During that time Maridell had her first child. After her husband’s military service ended, they returned to Richfield where they had four more children. Always active and serving in The Church of Jesus Christ of Latter-day Saints, Maridell still found time to direct and act in many community and church plays. She truly enriched the lives of so many in her community through her enthusiasm and talents in the arts and allowing so many others to share their talents. Sewing was also a lifelong love for her. After moving to Orem in 1979, she acted in film work and did voice-overs for the Mormon Church. She also became a water color artist. Up until the very end of her life, she was known as a very beautiful woman who carried herself with class and dignity. She and her husband Raynal are a great example of a beautiful marriage and love affair that lasted 61 years. She is remembered with great honor for her devotion to her children and for raising them in the gospel of Jesus Christ and filling them with a desire to work hard and become all they could be. She is survived by her husband, Raynal; brother, Wayne (Bev) Lewis; 5 children and their spouses: Todd (Brenda), Rod (Elayne), Trina (Stuart), Larry (Jani) and Marie (Lee); 21 grandchildren and 27 great-grandchildren. Funeral services will be held at 11:00 a.m., Monday, June 30, 2014 at the Heatheridge 6th Ward Chapel, 1505 North 130 East, Orem, Utah. Friends may call at the Berg Mortuary of Orem, 500 North State Street, Sunday, June 29 from 6-8:00 p.m. and at the church Monday from 9:30-10:45 a.m. prior to services. Interment will be in the Orem City Cemetery. Condolences may be sent online at www.bergmortuary.com.

Maridell Lewis Pearson (10/23/1929 -- 6/23/2014) passed away in Orem, UT after a long and beautiful life having been cared for by her children, husband, and others who loved her dearly. She is preceded in death by her parents, Roy and Verdell... View Obituary & Service Information

The family of Maridell Lewis Pearson created this Life Tributes page to make it easy to share your memories.