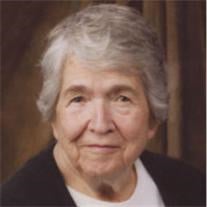 Our dear Marie Wakefield passed away in her sleep on August 15, 2012. Her posterity of 149 children, grandchildren and great-grandchildren miss her dearly and look forward to the day when we will see her again. Marie was born on January 2, 1923, in Salt Lake City, the second child of Charles Cyril and Viola Maud Irwin Martin. She attended schools in Salt Lake City before graduating from East High School and enrolling at the University of Utah while working at JC Penney in downtown Salt Lake. Throughout her life, Marie balanced three major loves: music, family, and the gospel of Jesus Christ. She inherited her considerable talents in music from her father who sang in the Mormon Tabernacle Choir and was a prominent tenor soloist. From the age of 11, Marie accompanied him on the piano at various venues in the Salt Lake area. Marie was incredibly gifted on the piano and organ and also had her own beautiful soprano voice. She regularly put those talents to use in order to bless the lives of people in her community and church, wherever she lived. Marie was always active in The Church of Jesus Christ of Latter-day Saints and shared her strong testimony of the Savior with family and friends through word and example. She epitomized the principles of sacrifice, mercy, and genuine love to her children and grandchildren and through service as president in the Relief Society, Young Women's and Primary; as ward organist, ward and stake choir director, and visiting teacher; and in many other service opportunities. During World War II, Marie swept an attractive sailor over the bow, and shortly thereafter, on May 26, 1944, Marie was married in the Salt Lake City Temple to that sailor, Melvin Lansing Wakefield, of Taylor, Arizona. After the war, the couple lived in Logan until Melvin graduated from Utah State University. In 1949, they moved to Pendleton, Oregon, where they raised their family for 18 years. In 1967, they returned to Utah and settled in Utah Valley. For several years, Marie worked as a cashier at the Missionary Training Center, greeting all incoming elders with her characteristic friendliness. After a one-year LDS mission to West Virginia in the early 1990s, Marie devoted the remainder of her days nurturing and inspiring her vast posterity, friends and acquaintances while also battling the ravages of macular degeneration, arthritis, and other debilitating illnesses. Through it all, she never lost her faith or fortitude and continued to quietly focus her energies on selfless service. Marie is preceded in death by her parents, her brothers Irwin and Glenn, sister Zola, an infant brother, a grandson, Taylor Wakefield, and a great-grandson, Brandon Wakefield. She is survived by her beloved husband of 68 years, Melvin; sister Julia Emery, brother Darrell (Edie) and sister-in-law, Beverly Martin; four sons, Lanny (Alice MacKay), David (Ann Cox), Robert (Clydie Wonnacott), and Gery (Gail Pope); four daughters, Jeanne (Jeryl) Smith, Susan (Barry) Preator, Margaret (Brent) Slater, and Irene (Curtis) Hill; 41 grandchildren (and 21 spouses); and 67 great-grandchildren. The family extends deepest thanks to the nurses and aides of Intermountain Hospice for their loving care and assistance to Marie and the family over the last month of her life. Funeral services will be Thursday, August 23, at 11 a.m., at the LDS Sharon East Stake Center, 2400 North 1060 East, Provo. Viewings for family and friends will be conducted Wednesday evening, August 22, 6-8 p.m. at Berg Mortuary, 185 East Center Street, Provo, and again before the funeral service, from 9:30-10:45 a.m., at the Sharon East Stake Center. Interment will be at the East Lawn Memorial Hills Cemetery, 4800 North 650 East, Provo. Condolences may be sent through her obituary at www.bergmortuary.com.

Our dear Marie Wakefield passed away in her sleep on August 15, 2012. Her posterity of 149 children, grandchildren and great-grandchildren miss her dearly and look forward to the day when we will see her again. Marie was born on January 2,... View Obituary & Service Information

The family of Marie Wakefield created this Life Tributes page to make it easy to share your memories.

Our dear Marie Wakefield passed away in her sleep on August 15,...

Send flowers to the Wakefield family.