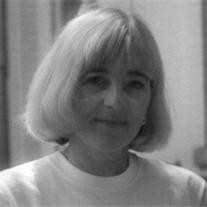 Our beloved sister, aunt, and friend, Marilyn Smoot, was taken from us too soon, on March 4, 2011. She was born October 1, 1947 in Havre, Montana, the daughter of Reed Smoot and Stella Madsen, and a great-granddaughter of Apostle and Senator Reed Smoot. The family returned to Salt Lake City in 1950. Marilyn graduated from East High where she was a dancer—a choreographer of modern dance performances for which she sewed the costumes. She pursued her dancing at the Martha Graham advanced modern dance academy. She attended classes at Utah State and Westminster and spent a couple of years in San Francisco, working in sales for Brooks Brothers. Returning to Salt Lake in 1970, she worked as a waitress at Log Haven. She opened her own dog business, The Groomery, which she operated for over 4 years. She continued her devotion to animal care and followed her heart to become first a docent and then a zookeeper at Hogle Zoo, where she worked diligently for over 25 years. She developed strong and loving care for many animals there, but was especially fond of the giraffes, penguins and hippos (Moe-Pig in particular). She helped hand raise many of them from infancy and remained their tenacious advocate. Marilyn developed a great personal repertoire of animal stories over the years and could elicit hearty laughs in response to her tales of the antics – taking baby hippos for strolls around the zoo, slickly removing a stuck toy from around Moe-Pig’s nose, or creating feeding strategies for a physically challenged giraffe. She loved traveling and went as far as Africa – three times! – the last time in 2000 as a participant in a successful world-wide effort to rescue hundreds of dying penguins in Cape Town. Emphysema led to Marilyn’s early retirement in 2001, although her love of the zoo, the animals, and her friends there would have kept her happy for years to come. Retirement allowed her time to pursue her avid interest in books and movies, sipping wine and reminiscing with family and friends, some relationships maintained since in high school. She is survived by her sisters Kathryn Egan (Wayne) and Anita Hartmann (Dieter), and nephew Jason Caldwell (Lisa) and niece Sherilyn Phillips (Trevor), and six grand nieces and nephews. She was preceded in death by her parents, whom she continued to love and miss terribly. We adored Marilyn with her wry sense of humor, respected her love of animals, and appreciated her strong sense of independence. She was a fun-loving, free spirit and was courageous to the end. The family appreciates and thanks Marilyn’s physicians, Jessica Morgan and Jeffrey Kurrus, neighbors and friends for their support during this difficult time. In lieu of flowers, Marilyn would appreciate a donation to your favorite animal welfare organization. Graveside services will be held at 11:00 a.m., Saturday, March 12, 2011 at the Provo City Cemetery, 610 South State Street, Provo, Utah. Condolences may be sent to the family through www.bergmortuary.com.

Our beloved sister, aunt, and friend, Marilyn Smoot, was taken from us too soon, on March 4, 2011. She was born October 1, 1947 in Havre, Montana, the daughter of Reed Smoot and Stella Madsen, and a great-granddaughter of Apostle and Senator... View Obituary & Service Information

The family of Marilyn Smoot created this Life Tributes page to make it easy to share your memories.

Our beloved sister, aunt, and friend, Marilyn Smoot, was taken...

Send flowers to the Smoot family.