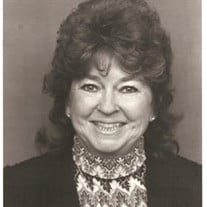 Marilyn Jean Osness Loose West aka “Grandma Red” of Provo, Utah, passed away September 25, 2017, surrounded by her loving family. She passed away the same way she lived, on her own terms and only when she was darn well ready to go. She was born February 7, 1931, in Ironwood, Michigan to Jesse and Agnes Osness, of Norwegian descent. She is survived by her children: Terry Bakken (Rose) of Provo, Utah; Cindy Loose Mecham (Don) of Woodland Hills, Utah; Jesse Loose of Provo, Utah and Joni Loose (Art) of Santaquin, Utah. She also leaves behind her treasured grandchildren: Cody, Celestial, Bridger, Hayley, Nicole, Jerilyn, Rob, Tim, Brandon and Ami, along with her great grandchildren: Anders, Meadow, Lily, Bailee, Baby Ava due in February, Ashlynn, Nick, Zoey, Kika, Jude and MacKenzie. She is survived by her best friend and sister, Patsy Faeth of Aberdeen, South Dakota and sister, Betty Correia of Campo, California, along with her darling little yorkie, “Lucy Loose.” Marilyn was preceded in death by her husband, Lieutenant Commander Herschel West; her husband Orrie Bakken; and her husband and lifelong friend, Robert Loose. Waiting for her with open arms, her infant daughter, Debbie Bakken; her infant great grandson, Hudson White; and her sisters, Lois Hurley and Joan Kempf; along with her close friends, Lucille Hall and Kay Curtis. Marilyn grew up in a household of five beautiful daughters in Pierpont, South Dakota. Her early years were spent working on a farm (feeding pigs and milking cows) and as a car-hop at Orrie’s Drive Inn, which she co-owned with her young husband. She loved the “hamburger business” and the many stories to tell of her early years growing up in the post-depression era in a small town with her sisters, whom she dearly loved. Her father was a barber and had many stories to tell over the years and her sweet mother, a full-time homemaker who worked tirelessly to make a comforting home life for her family. From the farm and drive-inn, she then “climbed the ladder” to work as a Department Supervisor at the South Dakota Employment Security Office and then moved to Minneapolis, Minnesota and worked at Forbes Company as an accountant. Marilyn then made her way out of the wind and snow to San Diego, California, where she landed one of her favorite jobs at KGTV-Channel 10, working with celebrities and at the same time enjoying the San Diego bay area and beaches. She then accepted a position with the San Diego Union Tribune. Marilyn then made her way back to the wind and the snow to Provo, Utah, and over the years she fell in love with the beautiful mountains and changing seasons. She became a full-time landlady, penny stock trader and antique dealer while raising her four children. During these years, she had a passion for ice-skating, reading legal thrillers, fashion and style, raising poodles, playing Bingo (especially winning), growing her rose gardens and soon became the “mother of yard sales” in Utah County. After raising her children, she became the Assistant General Manager of Brown Brother’s Furniture and later took a position at The Daily Herald in advertising and layout. She then “left” (wink-wink) the newspaper after becoming a union organizer – see “Norma Rae.” Marilyn then accepted a management position at Nature-All Corporation. Marilyn then got fed up with “working for the man” and opened a small children’s boutique shop called “Sleepy Hollow.” She decided she wasn’t busy enough, so she attended school to become a stock broker and a private detective. No boring life for this little red-haired 4’11” ball of energy! Later in life, she became an advocate for justice and founded “Courtwatch for Justice” and spent nine years of her busy life as the treasurer for the Military Officers Association of America (MOAA). Marilyn was a member of St. Mark’s Lutheran Church for over 50 years and taught Sunday School and held numerous other positions over the years along with originating and maintaining the Rose Garden dedication memorial. Marilyn lived life to the very fullest and has made an everlasting impression on every person who was lucky enough to know her. A visitation will be held at 12:30 to 1:45 on Saturday, September 30th prior to the service at 2pm at Berg Mortuary, 185 East Center, Provo, Utah. Interment will follow at Provo City Cemetery. Condolences may be expressed at www.bergmortuary.com.

Marilyn Jean Osness Loose West aka &#8220;Grandma Red&#8221; of Provo, Utah, passed away September 25, 2017, surrounded by her loving family. She passed away the same way she lived, on her own terms and only when she was darn well ready to... View Obituary & Service Information

The family of Marilyn Jean Osness Loose West created this Life Tributes page to make it easy to share your memories.

Send flowers to the West family.