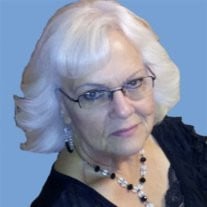 On October 27, 2013, our Mother, Grandmother, and beloved Wife passed peacefully through the veil while surrounded by her family inside her home. Marilyn was born on August 22, 1942 to Catherine Fay and Francis Louis Simpson of Springville, Utah. She married her Sweetheart Robert Norman Fulton. They were later sealed in the Salt Lake City Temple for time and all eternity on March 11, 1959. She gave birth to 8 beautiful children, 3 girls and 5 boys. She took great pleasure in raising her children, attending to their every need. She was the best example of true motherhood. Marilyn loved to bowl and won many awards and trophies. The trophies mainly collected dust and were rarely displayed. Instead, she would confess to the world that her greatest trophies earned in her life were her children. Her baking and cooking skills were legendary and always prepared with love. She eagerly loved to organize and host events for her family. She was an avid, vocal fan of her kids. Marilyn and her husband never missed any of her children's music performances, plays, or their many sporting events. Her testimony of the Gospel of Jesus Christ was strong. She led a life-long example to her family of the great plan of happiness. She was a strong individual who demonstrated great loyalty and service to her loved ones. Marilyn loved and cared deeply for those she served within many church callings. She especially loved the Young Women's program. She had a great impact on all those that were blessed to know and serve alongside her. Marilyn is preceded in death by her mother Catherine Fay Christensen, Father, Francis Louis Simpson and eldest brother Louis Simpson. Marilyn is survived by her husband Robert Fulton and her children, Craig (Cindy) Fulton, Lorraine (Dave) O’Brien, Brent (Jennifer) Fulton, Jill (Wes) Swaney, Mark (Anita) Fulton, Chad (Cassandra) Fulton, Brad (Jennifer) Fulton and Ashley (Matt) Stock. The collective, endearing grandchildren and great-grandchildren match the number of years she spent on earth with her loving mate, fifty four (54). Marilyn’s legacy of Faith, Service and love will have a lasting impression on all those who knew her. Funeral services will be held at 11:00 a.m., Monday, November 4, 2013 at the Sunset Heights 5th Ward Chapel, 600 South 1100 West, Orem, Utah. Friends may call at the church Sunday, November 3, from 6-8:00 p.m. and Monday from 9:30-10:45 a.m. prior to services. Interment will be in the Orem City Cemetery. Condolences may be sent at www.bergmortuary.com.

On October 27, 2013, our Mother, Grandmother, and beloved Wife passed peacefully through the veil while surrounded by her family inside her home. Marilyn was born on August 22, 1942 to Catherine Fay and Francis Louis Simpson of Springville,... View Obituary & Service Information

The family of Marilyn Fay Simpson Fulton created this Life Tributes page to make it easy to share your memories.

Send flowers to the Fulton family.