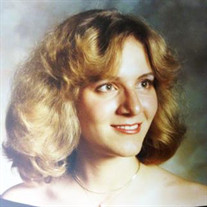 On Thursday, May 5, 2016, after many years of pain and fiercely fighting mental illness, Marina Dawn (Fannin) Rose, 53, of Orem, returned to her heavenly home. Marina was born on December 4, 1962 on Elmendorf AFB, Alaska, as the youngest of three to her parents Harold and Ada (Funk) Fannin. With her dad in the Air Force, the family lived in North Dakota, Utah, Spain, Turkey, Alabama, Ohio, and then back in Alaska. In her youth, Marina, excelled at school, was on the high school swim team, and loved volunteering with special needs children. Upon graduating from High School, Marina attended Brigham Young University. She took a break from college to serve a full-time LDS mission in Chicago, IL (Spanish Speaking), marry, and become a mother to her only child, Sarah. At the age of 26, after divorcing and becoming a single mother, Marina returned to BYU. With extreme perseverance and dedication to providing for Sarah, she received her B.S. in Computer Science, a task few women accomplished or even aspired to at that time. At 31, following the completion of her degree, Marina began working full-time in her technical field, and at 35, was diagnosed as Bi-polar. After 8 years of full-time work and single-motherhood, the load took its toll, and Marina began to experience periods of psychosis and battled alcoholism. In the midst of these struggles, in 2012, Marina met and Married her husband, Martin Rojas. Despite her trials, Marina was a light and inspiration in the lives of all those who saw her for who she truly was. She was incredibly intelligent, bold, kind, funny, creative, and tender-hearted. She loved absolutely and without holding back. Marina found joy in spending time with her daughter, Sarah, singing, vacationing, and dining out together, as well as attending the theatre and other live performances. Marina wanted her experiences to be of help to others. She wanted those who felt lost and struggled with mental illness to know they are not alone, and hoped that one day, there would be more support for those fighting a similar battle. For years Marina was able to fight her afflictions, but ultimately, psychosis took her life. Marina is now whole and at peace with her parents. She is survived by her husband, Martin Rojas, brother, Chuck (Lisa) Fannin, sister, Garnet (Mike) Olson, and her Daughter, Sarah (Chris) Bastian, and by her two granddaughters who were her light and love at the end of her life, Adina and Priya. Services will take place at Berg Mortuary of Orem, 500 North State Street, Orem, Utah on Saturday, May 14, with a viewing at 10:00 am followed by a memorial service at 11am. In lieu of flowers, please make donations payable to Marina Dawn Rose Memorial Account at America First Credit Union PO Box 9199 Ogden, UT 84409 to be used toward the support of the mentally ill. For other methods of donation please contact Sarah (Sadie) Bastian directly.

On Thursday, May 5, 2016, after many years of pain and fiercely fighting mental illness, Marina Dawn (Fannin) Rose, 53, of Orem, returned to her heavenly home. Marina was born on December 4, 1962 on Elmendorf AFB, Alaska, as the youngest of... View Obituary & Service Information

The family of Marina Dawn Fannin Rose created this Life Tributes page to make it easy to share your memories.

Send flowers to the Rose family.