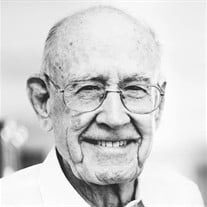 Mark Hyrum Henderson, our father, grandfather, and great-grandfather, passed away on April 20, 2015. He was nearly 96 years old. His long life was marked by devotion to his beloved wife Frances, his love for his family, his dedicated service to The Church of Jesus Christ of Latter-day Saints, and his commitment to his work for the Federal government. On May 18, 1919, he was born in Burlington, Wyoming, the second of nine children of David Monroe Henderson and Mary Anne McIntosh, and grew up in a two-room house. At age ten, he lost his youngest brother, and shortly after, his mother died of cancer, leaving her husband to raise Mark and his siblings. He studied civil engineering at the University of Wyoming, graduating with honors in August 1940. Upon graduation, he headed to Washington, DC to work for the Rural Electrification Administration and then the Office of the Chief of Engineers, Department of the Army. He was inducted into the U.S. Army in 1944. When the rest of his Battalion was alerted for airlift to the Battle of the Bulge in Germany, he was among a small group of civil engineers sent to the University of Michigan for training for the South Pacific campaign. After three months, the program was canceled and he was sent to Fort Belvoir, Virginia for Engineer Officer Candidate School. Following fifteen months of service in Puerto Rico, he was discharged from the Army and returned to work with the Office of the Chief of Engineers in Washington D.C. In December 1947, he married Frances Yeardley, from Uniontown, Pennsylvania, and the following June they were married in the Salt Lake Temple for time and eternity. In 1961, he transferred to the Engineer Research and Development Laboratories at Ft. Belvoir, where he was the Chief of the Mechanical Technology Department. During his service with the government, he did extensive traveling in the U.S., Europe, the Middle East, Alaska and Japan. He retired from the Federal government in May 1973. Shortly after his retirement from the government, Mark embarked on a second career of dedicated temple service. He was called as the first Recorder of the Washington D.C. Temple, where he later served as a temple ordinance worker, sealer, and counselor to two Temple Presidents. He had served at the Washington, DC Temple for over 25 years when he and his wife moved to Springville, Utah in May 2000. He briefly served as a sealer at the Provo Utah Temple. His beloved wife, Frances, preceded him in death in 2012. He is survived by his six children: Bonnie (Richard) Dickson of Federal Way, Washington; Mary Anne (Charles) McClelland of Springfield, Virginia; David (Paula) Henderson of Raleigh, North Carolina; Kathleen (Bruce) Wheeler of Ashton, Maryland; Mark H. (Amy) Henderson Jr. of Leonardtown, Maryland; and Linda (Wayne) Pullan of Payson, Utah. He is also survived by 27 grandchildren and 35 great-grandchildren. He was preceded in death by all of his siblings. Funeral services will be held at 10:00 a.m., Tuesday, April 28, 2015 at the Spring Creek South Stake Center, 350 North 400 East, Springville, Utah. Friends may call at the Berg Mortuary of Provo, 185 East Center Street, Monday from 6-8:00 p.m. and at the church Tuesday, from 8:30-9:45 a.m. prior to services. Interment will be in the Historic Springville Cemetery. Condolences may be sent online at www.bergmortuary.com. In lieu of flowers, please consider a donation to the Temple Patron Assistance Fund.

Mark Hyrum Henderson, our father, grandfather, and great-grandfather, passed away on April 20, 2015. He was nearly 96 years old. His long life was marked by devotion to his beloved wife Frances, his love for his family, his dedicated service... View Obituary & Service Information

The family of Mark Hyrum Henderson created this Life Tributes page to make it easy to share your memories.

Send flowers to the Henderson family.