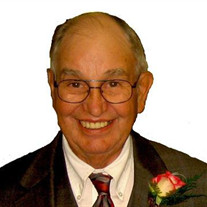 Markel Allen Caldwell, beloved brother, husband, father, stepfather, grandfather and great-grandfather passed away peacefully on Monday, November 16, 2015 at the age of 87, in Provo, Utah. Markel was born on August 14, 1928 in Vernal, Utah, to Lamond and Viola Caldwell. He was the second child in a family of seven. He was self-employed for most of his working years, owning a commercial furniture installment company. He installed chairs, benches, bleachers and backstops in many of the stadiums, schools, churches and temples in Utah and surrounding states. After retirement he enjoyed staying active by being a crossing guard for Provo School District. Markel was a faithful member of the LDS church, serving in many active roles. He, along with his wife Nadine, fulfilled a lifelong goal by serving a mission to Martins Cove in Wyoming. Markel was a jack of all trades and could fix or build anything put in front of him. He enjoyed fishing, tinkering in his wood shop and growing a garden of fruits and vegetables. He also enjoyed time with family, especially the time spent with his great-grandchildren later in life. Markel is survived by his wife of 39 years, Nadine; siblings: Donald (Bernice) Caldwell, Monta Rae Showalter, Arlo (Wilma) Caldwell, Christine (Jerry) Smallwood; children: Linda Evans, Rudy (Terri) Caldwell, MaryAnne (Bob) Smith, John (Betty) Caldwell and Sharon (Randy) Judd; stepchildren: Jim (Christine) Bell, Allan (Julie) Bell, Debra (Gary) Mendenhall, Carol (Glenn) Hawkins, Alise (Martin) Meyer, Steve (Karie) Bell and LaNae (Todd) Hunter; 56 grandchildren and a rich posterity of great-grandchildren. He is having a joyful reunion in heaven with his parents and siblings Elva and Raymond Funeral services will be held at 2:00 p.m., Saturday, November 21, 2015 at the Grandview 5th Ward Chapel, 1555 North 1350 West, Provo, Utah. Friends may call at the Berg Mortuary of Provo, 185 East Center Street, Friday from 6-8:00 p.m. and at the church Saturday from 1-1:45 p.m. prior to services. Interment, Provo City Cemetery. Condolences may be extended to the family at www.bergmortuary.com.

The family of Markel Allen Caldwell created this Life Tributes page to make it easy to share your memories.

Send flowers to the Caldwell family.