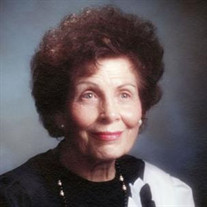 Martha Watson Cook, 97, of Provo, Utah, died at Spanish Fork, Utah, on June 6, 2016. She was the daughter of Robert and Rozelia (Meservy) Watson and the widow of Adrian Hulet Cook, a prominent rancher of Tetonia, Idaho. Martha was a native of Dubois, Idaho, attended schools in Osgood and Idaho Falls, Idaho, and graduated from Madison High School in Rexburg, Idaho. She completed a secretarial degree at LDS Business College in Salt Lake City in 1939, prior to becoming a federal employee at the Agricultural Adjustment Administration in Driggs, Idaho, the following spring. It was here that she met her future husband who had come to that office to apply for rationed farm equipment during the war. They were married May 21, 1945 in the Salt Lake Temple and raised their family in Teton Valley. Martha returned to federal employment in 1956, serving as Postmaster of Tetonia, Idaho, for twenty-three years. During the 1960s she held positions in the Teton County Farm Bureau Woman’s Organization and the Teton County Chamber of Commerce. She was an active member of the LDS Church having served over her lifetime in nearly every position of the Relief Society, YWMIA, and Primary and also as Sunday School teacher. Mr. and Mrs. Cook served a full-time LDS mission to the Sioux Indians in South Dakota 1979-1980. The couple retired to Provo, Utah in 1982 where Martha served as a Provo Temple worker and in the Daughters of the Utah Pioneers. She is preceded in death by her husband, her parents, five brothers, one sister, a grandson, and one great-grandson. She is survived by two sisters, Lucile Watson and Derena Watson Tew both of Pleasant View, Utah; three children: Shirlene Cook Newmeyer of Moroni, Utah; A. Gaylon Cook of Waycross, Georgia; and Lyndon W. Cook of Woodland Hills, Utah; fourteen grandchildren, forty-five great-grandchildren and three great-great-grandchildren. Funeral services will be held at 11:00 a.m., Saturday, June 11, 2016 at the Pleasant View 7th Ward Chapel, 2445 North 650 East, Provo, Utah. Friends may call from 10-10:45 a.m. prior to services. Interment, Provo City Cemetery. Condolences may be expressed to the family at www.bergmortuary.com.

Martha Watson Cook, 97, of Provo, Utah, died at Spanish Fork, Utah, on June 6, 2016. She was the daughter of Robert and Rozelia (Meservy) Watson and the widow of Adrian Hulet Cook, a prominent rancher of Tetonia, Idaho. Martha was a native of... View Obituary & Service Information

The family of Martha Birdie Watson Cook created this Life Tributes page to make it easy to share your memories.

Send flowers to the Cook family.