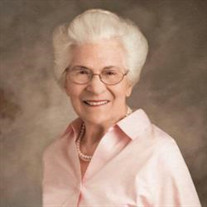 A bright and giving spirit, Martha Facer Proctor Flandro, 100, slipped into the eternities on December 7, 2019 after a fall that broke her hip. She was born May 23, 1919 in the tiny farming community of Holbrook, Idaho, and lived there until the age of 8 when she moved to a ranch in Cove, Oregon, tucked away under Mount Fanny. There she learned the qualities that would shape her life—seeing people with eyes of boundless love, the resilience and courage of a girl who grew up on a ranch with a buoyant outlook, and a close connection with God that only intensified over the years. When she was caught in a biting blizzard as a child, and laid down about to freeze to death, a voice called her, “Martha, get up and come home,” and she did, saving her life. She heard that voice again this week, and did come home. An avid learner, Martha attended BYU, and then ten months before Pearl Harbor, received a mission call to the Central States Mission, the first of three missions she would serve for The Church of Jesus Christ of Latter-day Saints—also serving as a senior in Stettler, Alberta, Canada and in the temple in Madrid, Spain. After her first mission, she received 24 marriage proposals, all of which she turned down, but number 25 captured her heart. She met Paul Dean Proctor while she was teaching seminary in Cedar City and they were married in the Salt Lake Temple, March 5, 1945 by David O. McKay. They enjoyed more than 54 years together. Late in life after Paul’s death, she married Royce Flandro, at age 83, and they were married 16 years. The Proctors lived in Indiana, where Paul received his PhD in geology, then in Provo, where he taught at BYU, but adventure called and they took their four sons, Paul, Lane, Kirk, and Scot and headed to Rolla Missouri for a new teaching job at the University of Missouri at Rolla (UMR). What was to have been a two-year stay became 27 years, and their friends there became family. We asked Mom once why everyone we met said, “We think of your mother as our mother,” and she said, “I make other people’s lives my business.” Martha embraced everyone as her concern, so she would take in as her own the missionary who had mumps, the new mother who broke her leg, the lonely woman who needed a ride to church each week for years and years, and the soldiers far from home. In her attention to others, she’s just not like the rest of us. She showed us how to be. Wanting the best for their boys, the Proctors moved to a 234-acre woods and farm on the outskirts of Rolla, where with her adventurous spirit, she let the boys explore, keeping creatures from snakes to crows to hamsters, and hand-building some serious rockets that would be launched 1000’s of feet into the air. She went spelunking with the boys in Missouri’s many caves, gathered crowds for fun, and also was the director of many plays in the community. She opened her own interior decorating store that offered distinctive style. Martha was also a citizen of the world. Two different years, the Proctors lived in Ankara, Turkey, where Paul taught at Middle Eastern Technical University, and she had the pluck to live off the Turkish economy, cooked with all the local foods, and directed plays in English. The ability to be friends with anyone of any culture served her well as she adopted Paul’s international students over the years and hosted people from 80 countries—whom, of course, became part of the family. Their house became unofficially “Martha’s Bed and Breakfast.” She served in the Church in many callings, driving more than 2,000 miles a month for some of them. She served in the Temple for 20 years. She created traditions that bound her family and friends, including 4th of July turtle races, Thanksgiving gingerbread houses, and Christmas rice pudding. To be with her was to be mentored and carry away wisdom and life-lessons. She was adventurous—taking the Trans-Siberian railroad from Beijing to Moscow and also riding a camel at 93 in Jerusalem. She was the picture of resilience, taking any heartbreak with courage and strength. We wanted to know her secret. When a grandson wasn’t feeling well, she said, “Come close and let me rub off just a little of my pollen on you.” When we asked her about her source of such remarkable well-being, she always said, “I talk to Heavenly Father all the time and He is always with me.” She is preceded in death by her parents, Martha Amanda Holbrook and William Henry Facer; 6 siblings; husbands, Paul Dean Proctor and Royce Pendleton Flandro; son, Kirk Facer Proctor, and a granddaughter, Melissa Proctor. She is survived by her sons, Paul (Peggy), Lane (Pam), Lyn (who was married to Kirk), and Scot (Maurine); 23 grandchildren and 53 great-grandchildren, and her brother, Reed. Funeral services will be held at 11:00 a.m., Monday, December 16, 2019 at the Edgemont 5th Ward Chapel, 350 East 2950 North, Provo, Utah. Friends may visit with the family at the Berg Mortuary of Provo, 185 East Center Street, Sunday, December 15 from 6-8:00 p.m. and at the church Monday from 9:00-10:30 a.m. prior to services. Interment, Eastlawn Memorial Hills. In lieu of flowers, give to the missionary fund of The Church of Jesus Christ of Latter-day Saints. Condolences may be expressed at www.bergmortuary.com.

A bright and giving spirit, Martha Facer Proctor Flandro, 100, slipped into the eternities on December 7, 2019 after a fall that broke her hip. She was born May 23, 1919 in the tiny farming community of Holbrook, Idaho, and lived there until... View Obituary & Service Information

The family of Martha Facer Proctor Flandro created this Life Tributes page to make it easy to share your memories.