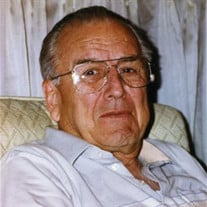 Marvin Vance Stratton died at the age of 94, on May 6, 2014 in Orem, Utah. He has left behind a legacy of faithfulness to his God and to his family. He was born December 14, 1919, in Provo, Utah, to James George Stratton and Nina Vance Snow, and he was raised in Orem. He worked hard in many different capacities throughout his life. After his marriage to Nanalee Johnson on June 21, 1943 in Salt Lake City, the two of them worked in the fruit farming business. A few years later, Marvin went to California and worked as a professional scouter. Shortly thereafter he returned to Orem and farming, but later decided to sell his land and he turned to the insurance business. He then worked as an agent for Farmer Insurance until his retirement in 1974. After his retirement, Marvin enjoyed spending time with his family, traveling, and serving in The Church of Jesus Christ of Latter-day Saints. He served three missions with his wife, Nanalee. The first mission was to the Arizona Holbrook Mission, where he unfailingly repaired and hauled around trailers for the young elders to live in. The second mission was to Gila, New Mexico, where they provided assistance to a church branch. The third mission was in Port Richey, Florida, where they again worked in a branch. They also served locally at the MTC. He was much loved and respected by his family and others who had the opportunity to come in contact with him. He loved people and had a ready smile for others. He loved to have his family around him. He funded family reunions for many years. The grandkids remember him as the “tickle monster” who always had a treat for them in his pocket. His kids remember him as the Hand and Foot champion. We all remember him as a dad and grandpa who loved us and loves us still. Marvin is survived by his wife, Nanalee Johnson Stratton, and his children, Barry Johnson Stratton, Paul Marvin Stratton, Ronald August Stratton, Alan James Stratton, Nanalee Jean Stratton Leavitt, Becky Stratton Schlappi, and Shelly Stratton Gilbert. He has 33 grandchildren and 53 great-grandchildren. He is also survived by two brothers, Vern Stratton and Herbert Stratton, and two sisters, Emma Stratton Houghton and Dorothy Stratton Fielding. He is preceded in death by his siblings, James George Stratton, Franklin K. Stratton, and Nina Stratton Clegg. Funeral services will be held at 11:00 a.m., Monday, May 12, 2014 at the LDS Chapel, 1120 East 600 North, Orem, Utah. Friends may call at Walker Sanderson Funeral Home (old Stratton family home), 646 East 800 North, Orem, Utah, Sunday from 6-8:00 p.m. and at the church Monday from 10-10:45 a.m. prior to services. Interment will be in the Orem City Cemetery. Condolences may be sent online at www.bergmortuary.com.

Marvin Vance Stratton died at the age of 94, on May 6, 2014 in Orem, Utah. He has left behind a legacy of faithfulness to his God and to his family. He was born December 14, 1919, in Provo, Utah, to James George Stratton and Nina Vance Snow,... View Obituary & Service Information

The family of Marvin Vance Stratton created this Life Tributes page to make it easy to share your memories.

Send flowers to the Stratton family.