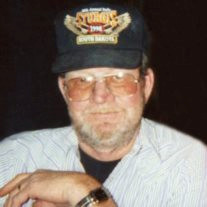 Marvin Moore Wilcock, our loving husband, father, grandfather, brother and friend, passed away March 3, 2014 at American Fork Hospital. Marvin was born April 30, 1942 in Spry, Utah, to Glen Orton and Vina Moore Wilcock. He had four siblings: Rose, Evelyn, Joan, and Ronald. They were raised in Lehi, Utah. Marvin had many friends growing up. He played basketball for Lehi High School. He ran around with the renegades known as the “Wild Bunch”. Marvin was in the US Army and spent time deployed in Alaska. His career included 30 years as a farmer for Mendenhalls. He was also the caretaker for Paul Mendenhall at the same time. Marvin was employed at Camp Williams for 26 years as the resident handy man. He was jack-of-all trades, specializing in electrical. He was the ultimate MacGyver. If it ran by electricity, it had a remote control wired by Marvin to run it. He was famous for such inventions as the West Virginia air conditioner, and the trailer awning made from pvc pipe. His Christmas lights were the talk of the town. Last year, he hung just over 18,000, and although it raised his city bill drastically for the month of December, he found great joy in this tradition. He took pride in the cultivation of his many rose bushes throughout his yard. Marvin was also an avid hunter. Just last year he was able to get his elk out at the Book Cliffs, after many hours spent scouting beforehand. He enjoyed the outdoors, camping and riding four wheelers. He loved going on his daily tour. Marv was a fantastic pool player and won many a game of horseshoes. He was a true blue BYU fan and a Utah Jazz fan. He loved the Utah/BYU rivalry and was involved in many pranks throughout the years. Marvin met and married Linda “Blondie” Higgs on October 9, 1993. They were the parents of two children, Mark and Joshua. Marvin and Blondie enjoyed trips to Montello, Wendover, Jackpot and Mesquite with friends. They looked forward to their traditional Easter campouts and being grandparents. Marvin and Blondie shared 20 wonderful years together. To say this man will be missed would be an understatement. He made an impression that was unforgettable in so many lives. Marvin was a father figure to those who didn’t have one. He was a friend in the truest sense. Always right there when needed. He would have given you the shirt off his back. We will laugh as we remember the many “Marvinism’s”, such as “gapsin”, “doins” and “sannich”. We will miss his humor and quick wit. The stories and memories are by the thousands, as this man lived his life to the fullest. He appreciated each day and lived it as if it were his last. He had a deep love for his family and friends, and his passing will leave a void in all of us. Thank you Marvin for being such a wonderful man. Thank you for the laughter and all the cherished memories. Until we meet again. Marvin is survived by his wife Linda; children: Joshua Marvin (Jennifer) Wilcock and Mark (Stefanie) Ray; sisters: Rose Goodwin, Evelyn Yates, Joan (Gary) Gurney all of Lehi; four grandchildren: Savanna, Garrett, Alexa, and Spencer. He was preceded in death by his parents; infant brother, Ronald Wilcock and brother-in-law, Rex Goodwin. Graveside Services will be held at 12:00 noon, Monday, March 10, 2014 at the Lehi City Cemetery, 1100 North 400 East, Lehi, Utah. Friends may call at the Lehi West Stake Center, 1920 North 500 West, Lehi, Utah, from 9:30-11:30 a.m. prior to services at the cemetery. Condolences may be sent online at www.bergmortuary.com.

The family of Marvin Moore Wilcock created this Life Tributes page to make it easy to share your memories.

Send flowers to the Wilcock family.