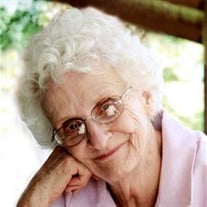 Mary Elizabeth (Beth) Brereton Larsen McCabe passed away peacefully in her sleep in Orem, Utah, March 11, 2015. Born January 13, 1922 to Richard Eugene and Amalia Olsen Brereton in Provo, Utah. She was the youngest of eight children. She grew up on a farm near the mouth of Provo Canyon. Her family owned and ran one of the first Gas Stations/Convenience stores in the area. Beth graduated in 1939 from Lincoln High School in Orem, Utah. She was an avid reader until just recently. She always had a book near one of her chairs in each room. Beth would stay up all night sometimes when she had a good book to read. She loved to sing and always was humming one of her favorite songs. She met and married Blaine Reed Larsen on April 10, 1941. Their marriage was later solemnized in the Salt Lake Temple January 6, 1943. Blaine passed away October 8, 1977. Mother worked many years at the State Hospital in Provo taking care of patients and working in the cafeteria and then running the Snack bar. Working hard all her life, caring for others but mostly her family, she did that the best. She married John James McCabe September 23, 1989, he passed away February 25, 1995. Blaine and Beth were the parents of four boys and four girls. Daughter-in-law Eileen (Blaine Michael, Deceased), Richard (Jean), Brad (Alice), Barbara Andra (Larry), Robin Larsen (Rodney), Steven, Mary Beth Perry (Ronald), JaNell Forbush. They left a legacy of 8 children, 45 grandchildren, 111 great- grandchildren, and 3 great-great-grandchildren. Funeral services will be held at 11:00 a.m., Monday, March 16, 2015 at the Spring Creek 14th Ward, 672 North 250 West, Springville, Utah. Friends may call at the Berg Mortuary of Provo, 185 East Center Street, Sunday, March 15 from 6-8:00 p.m. and at the church Monday from 9:30-10:45 a.m. prior to services. Interment, Orem City Cemetery. Condolences may be sent online at www.bergmortuary.com.

The family of Mary Elizabeth "Beth" Brereton Larsen McCabe created this Life Tributes page to make it easy to share your memories.

Send flowers to the McCabe family.