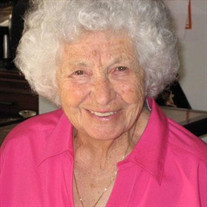 Mary Tardoni Guerri, age 98, passed away peacefully in Orlando, FL on December 8, 2015. Mary was born February 7, 1917 in Oakley, WY to Frank and Josephine Rossetti Tardoni. She married Attilio on December 11, 1937 in Rock Springs, WY. Mary lived in Wyoming until 1955, when she moved to Provo, UT. After Attilio’s death in 2003, she moved to Orlando with her daughter but her heart always belonged in Wyoming and Utah. She mounted her Wyoming and Utah license plates on her wall to remember her roots. Mary was a loving and proud mother, grandmother and great-grandmother. She was a devout member of St. Francis of Assisi Catholic Church in Provo until moving to Florida where she became a member of Holy Family Catholic Church. She is survived by her daughter, Joanne (Richard) Clarkson of Orlando, FL; 4 grandchildren: Duane of Orlando, FL; Teresa (Jim) of Wichita, KS; Lesa (Bob) of Boulder, CO; and David (Aris) of Ft. Collins, CO; and her 10 great-grandchildren: Megan, Matthew, Christie, Colton, Jake, Paige, Clarkson, Ryder, Anna, and Zoe as well as many nieces and nephews. She was preceded in death by her husband, Attilio; parents, Frank and Josephine; 2 sisters, Jennie and Annie; brother, Joe; and 2 sons, Attilio Jr. (Sonny) and Kenneth James. Her loving and caring ways will be missed by all who knew her. Mass will be held at 11:00 a.m., Wednesday, December 16, 2015 at the St. Francis of Assisi Catholic Church, 65 East 500 North, Orem, Utah. Friends may call at the Berg Mortuary of Provo, 185 East Center Street, Tuesday from 6-8:00 p.m. and at the church Wednesday from 10-10:45 a.m. prior to service. Interment, Provo City Cemetery. Condolences may be extended to the family at www.bergmortuary.com.

The family of Mary Tardoni Guerri created this Life Tributes page to make it easy to share your memories.

Send flowers to the Guerri family.