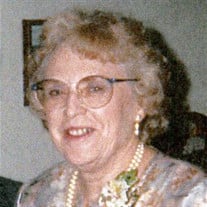 Mary Leona Badger Crane Hansen, 94, passed away peacefully on Wednesday, February 25, 2015 in The Dalles, Oregon. Mary was born on her parent’s 80 acre homestead farm near Burley, Idaho. She was the youngest of three sisters (Lillian, Marjorie and Irene) and one brother (Owen). Mary lived in the days of riding to School during the winters in a horse drawn sleigh! Mary was the “chicken girl”, helping her mother who raised hundreds of chickens. She also helped feed the bum lambs, turkeys, geese or other animals on the farm. Life on the farm was uneventful except for an occasional trip to Utah to visit relatives and get fruit from her Grandpa Badger. She met and fell in love with John Crane from Oakley, Idaho. Mary and John were married on the Salt Lake LDS Temple on May 3, 1939. The young couple soon moved to Portland, Oregon Where Frederic John was born. They had a 1929 Model “A” Ford that John purchased for $75. When employment did not work out in Portland, they returned to Burley, where Sandra Mary was born. They later moved to Salt Lake City for a time then back to Burley where they purchased a lot for $50 and built a small, two room home. James Owen was born in Idaho. The family soon moved to California in 1947. The family moved briefly to Pittsburgh, where Diana May was born then later to Byron, where they enjoyed living on a little farm complete with a cow, chickens, bees along with harvesting almonds. This is where Diana May, Kelvin Jeddy and Chloris Annis were born. Mary and John enjoyed helping to build a new chapel for The Church of Jesus Christ of Latter-day Saints in Brentwood. Mary has always been an active member of the LDS Church. From Byron the family of eight purchased Mary’s “dream” home in Bethel Island, California for $6,000. Mary was a talented writer and from the age of 17 wrote for a variety of newspapers for about 30 years. Some of her articles were circulated through the Associated Press and she also wrote regional news for a Pittsburgh, California newspaper. She occasionally sold articles to various magazines. On one occasion Mary won a trip to Hawaii from a tire store, by writing a poem about how much she loved tires! Employment needs created another move for Mary’s family. This time to a 200 acre ranch near Central Point, Oregon. Mary and John logged fir trees from their ranch and ran two Christmas tree lots; one in Medford and one in Grantspass. The family also raised cattle, oats, and enjoyed having a milk cow, chickens and rabbits. They were members of the Shady Cove, Oregon branch of their church where they both served in many capacities. Mary loved to travel. Mary and John spent time in the Eastern United States, Canada, Mexico and Arizona. They also enjoyed trips to Europe and Greece. During this time Mary and John built cabins and subdivided their 200 acre ranch in Oregon and decided to move to Provo, Utah to be closer to some of their children. While living in Provo, the couple enrolled in classes at Brigham Young University. Mary also cared for her father, Archie Badger until his death in 1983. During Mary’s time in Provo she and John sponsored several refugee families from Laos and Vietnam. Over several years they assisted many families in relocating to the United States. This was a very rewarding experience for them. Mary loved acting and was involved in many theater and movie productions. When John became ill with Alzheimer’s disease, she cared for him until his death in 1990. Mary met and married Anthony Hansen in 1993. They enjoyed traveling together to many countries around the world. Anthony died in 2009. In recent years, Mary has spent time with her children in Utah and California and most recently resided at Flagstone Senior Living in The Dalles, Oregon. Mary is survived by her six children. Her descendants number 28 grandchildren, fifty great-grandchildren and 1 great-great-grandchild. Funeral services will be held at 2:00 p.m., Saturday, March 7, 2015 in the Berg Mortuary Drawing Room Chapel, 185 East Center Street, Provo, Utah. Friends may call at the mortuary from 1:00-1:45 p.m. prior to services. Interment, Provo City Cemetery. Condolences may be sent online at www.bergmortuary.com.

Mary Leona Badger Crane Hansen, 94, passed away peacefully on Wednesday, February 25, 2015 in The Dalles, Oregon. Mary was born on her parent&#8217;s 80 acre homestead farm near Burley, Idaho. She was the youngest of three sisters (Lillian,... View Obituary & Service Information

The family of Mary Leona Badger Crane Hansen created this Life Tributes page to make it easy to share your memories.

Send flowers to the Hansen family.