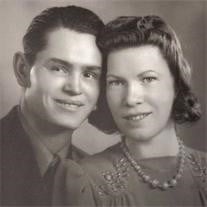 Mary was born December 16, 1922 in Provo, Utah to Jeppe and Annie Hahn Jeppson. She died November 14, 2012 after a brief illness and causes incident to age. She is the fifth of seven children. She had three brothers and three sisters. Her Dad died when she was eight years old. Her youngest sister, Hazel, is the only one of the family still alive. Mary grew up in Provo and attended schools there in her youth. She married William Terry on Christmas Eve, 1940. He was soon off to the South Pacific in World War Two. They lived in Salt Lake City and Eureka as well as Provo. They eventually settled in Provo where they raised their five children, 2 girls and 3 boys. Bill and Mary have been married almost 72 years. Mary was a mother and homemaker but worked outside the home from time to time. She worked as a waitress, nursing home aide, motel maid, and lunch lady among other jobs. During the war, she learned how to service cars and worked in a gas station. Mary loved to quilt. She was a member of the "Has Beens" quilting club. She made the old fashioned hand stitched quilts and yarn tied quilts. All of her children, grandchildren and many of her great-grandchildren have quilts she has made. Mary liked to design and make her own quilt tops, doing many intricate designs out of various quilting blocks. Mary participated in the Civil Air Patrol (CAP) with her husband. She was a qualified radioman and ground interrogation team member. Bill and Mary were life-long members of the Rivergrove 2nd Ward of The Church of Jesus Christ of Latter-day Saints. Mary served as Relief Society President, visiting teacher, and in a variety of other callings. She served as a Cub Scout Den Mother when her boys were of that age. Together, she and Bill served as Employment Missionaries and in the Baptistery of the Provo Temple. Mary was well known for her service to others. She provided meals, clothing, and other services almost weekly throughout her life. Bill and Mary's home was always open to those in need. Counting those who married into the family, she and Bill currently have 139 descendants including 49 grandchildren, 73 great-grandchildren, and four great-great-grandchildren. Mary was preceded in death by daughter Norma Terry Killpack. She is survived by her husband William Adair Terry, sister Hazel Paffenbarger and her children, Steven (Gloria) Terry, Russell (Karren) Terry, (Paul) Lynda Hallman, Byron (Linette) Terry, and (Lynn) Killpack. Special thanks to the doctors and staff of American Fork Hospital and the caring staff of the Alpine Valley Care Center in Pleasant Grove, Utah who took very good care of Mom. Funeral Services will be held at 2:00 p.m., Saturday, November 17, 2012 at the Berg Drawing Room Chapel, 185 East Center Street, Provo, Utah. Friends may call from 1-1:50 p.m. prior to services. Interment will be in the Provo City Cemetery. Online obituary is at: www.bergmortuary.com.

Mary was born December 16, 1922 in Provo, Utah to Jeppe and Annie Hahn Jeppson. She died November 14, 2012 after a brief illness and causes incident to age. She is the fifth of seven children. She had three brothers and three sisters. Her Dad... View Obituary & Service Information

The family of Mary Jeppson Terry created this Life Tributes page to make it easy to share your memories.