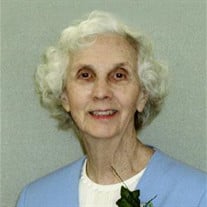 Mary June Snow West, passed away peacefully a month shy of her 97th birthday, at her home in Provo, Utah, on May 5, 2015. Defying expectations of her demise, she survived for over five years in hospice care. She was born on June 7, 1918, the only child of Justus Forrest Snow and Mary Ann Smith Snow in Payson, Utah. June’s mother suddenly passed away shortly after June’s 5th birthday. Several of the relatives shared in raising her, especially her beloved Aunt Wave Hinckley and family. Justus later married Opal Key, who became her cherished step mother. June met her sweetheart and eternal companion, Richard Knowlton West, with whom she was sealed in the Salt Lake Temple, on June 30, 1943, by Apostle George Albert Smith. She was a devoted wife, mother, grandmother, and great-grandmother. She was preceded in death by her husband (May 22, 1998), and her son Ronald Snow West (April 15, 1971). June was valedictorian at Spanish Fork High School, and attended Long Beach City College and the University of Utah. She was a switch board operator at Fort Douglas during WWII. Richard, her future companion, had been called to serve an LDS mission in Germany-which required an inspired evacuation as the war began in 1939. He was returned to the states and completed his mission in North Carolina. They later met, married, and had the first of their two daughters, Marianne. Richard enlisted and served honorably in the Navy, as a POW translator and hospital microbiologist in Farragut, Idaho, where they had their other daughter, Loraine. June had interrupted her college education when they married, being a quarter short of her Bachelor’s degree, to share, support, and help with Richard’s education, career, and family. Richard’s career led them to Washington, DC (and Maryland) where they had two sons, Richard (Rick) and Ronald (Ron). June was a lifelong member of The Church of Jesus Christ of Latter-day Saints, ultimately serving a mission with her husband as tour guides for the Provo Tabernacle. She worked for many years as a seamstress. Sewing was more than a job, it was a joyful and bonding hobby, sewing many outfits and costumes for the kids and their dolls-a skill passed to the daughters and granddaughters. One of June’s most notable characteristics was how she utilized her uncompleted college degree. She became an advocate, a driving force, and unending support of her children’s and grandchildren’s higher education. Consequently, the extended family has relished many accomplishments, including a solar physicist, dentist, natural pharmacologist, business administrator, engineer, nurse, microbiologist, teaching administrator, physicist, HVAC technician, etc. It would be difficult, if not impossible, to extricate her profound influence on so many of the family’s lives. June is survived by her children; Marianne Elkington, Loraine (Walter) Terpening, Richard (Jan) West; 13 grandchildren; and 18 great-grandchildren. Graveside services will be held at 10:30 a.m., Monday, May 18, 2015 at the Wasatch Lawn Cemetery, 3401 South Highland Drive, Salt Lake City, Utah. Family and friends will meet at the grave. Condolences may be sent online at www.bergmortuary.com

Mary June Snow West, passed away peacefully a month shy of her 97th birthday, at her home in Provo, Utah, on May 5, 2015. Defying expectations of her demise, she survived for over five years in hospice care. She was born on June 7, 1918, the... View Obituary & Service Information

The family of Mary June Snow West created this Life Tributes page to make it easy to share your memories.

Mary June Snow West, passed away peacefully a month shy of her...

Send flowers to the West family.