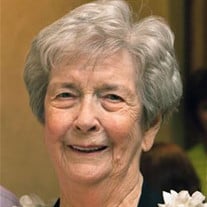 Mary Lou Dixon Taylor, 91, who was a long-time resident of Provo, passed away February 29, 2016 at her daughter’s home in Laie, Hawaii. Her loving husband, Floyd R. Taylor, preceded her in death; they were married for 56 years. Mary Lou was born May 16, 1924 in American Fork, Utah to Delbert Andrew and Helen Chipman Heiselt. When she was 14 months old her father passed away. Six years later, her mother, Helen, married Fred W. (Buck) Dixon, the father who lovingly raised her. She worked part-time while attending Brigham Young University as a secretary for Elder Hugh B. Brown, a professor at BYU. She married Floyd R. Taylor in the Salt Lake Temple in 1947. They both graduated from Brigham Young University in 1948. They set up residency in Provo where they enjoyed raising their family. Mary Lou enjoyed being at home raising her children, but always had a love of learning and continued her education. She took a class each semester; Mary Lou completed her MA degree in 1970. When her youngest child began school, she went to work at Farrer Junior High as a school counselor. She had a wonderful career counseling hundreds of youth for 20 years. Mary Lou was always active in the LDS Church serving in many callings in her ward and stake in the Primary, Young Women, Sunday School, and Relief Society. Mary Lou’s devotion and service to the LDS Church and the students with whom she worked was exceeded only by her love and devotion to her family, who were the center of her life. Enjoying family vacations and reunions were a priority for her. The family took many trips in their camper, first across Utah and then from coast to coast. Mary Lou and Floyd created a gathering place at their home for their children and extended family on the Fourth of July. These are memories that established strong family bonds. Genealogy and family history were a focus in Mary Lou’s life in her later years. She wrote bedtime stories from the histories of her ancestors and had them printed for all of her children, grandchildren, and great-grandchildren. These stories provide faith-promoting lessons that connect our family through the generations. Mary Lou is survived by her five children: Colleen (Steve) Densley, Provo, Utah; Douglas Dixon Taylor, Douglas, Wyoming; Richard Floyd (Diane) Taylor, Orem, Utah; Julie Ann (Carl) Seaberg, Alston, Michigan; and Lisa (Ken) Wagner, Laie, Hawaii; one brother, David (Pat) Dixon, Provo, Utah and two sisters-in-law, Pat Dixon and Judy Dixon. Mary Lou also leaves behind a great legacy of 21 grandchildren, 55 great-grandchildren and two great-great-grandchildren who dearly love her and will miss her until we meet again. She was preceded in death by her husband, Floyd R. Taylor; daughter, Mary Ann Taylor and two brothers, Fred Dixon and Richard Dixon. Funeral services will be held at 11:00 a.m., Saturday, March 12, 2016 at the Oak Hills Stake Center Chapel, 925 East North Temple Drive, Provo, Utah. The viewing will be held at the Stake Center, Friday, March 11, 2016 from 6:30-8:00 p.m. and Saturday from 9:30-10:30 a.m. prior to services. Interment will be in the American Fork City Cemetery. Condolences may be expressed to the family at www.bergmortuary.com.

Mary Lou Dixon Taylor, 91, who was a long-time resident of Provo, passed away February 29, 2016 at her daughter&#8217;s home in Laie, Hawaii. Her loving husband, Floyd R. Taylor, preceded her in death; they were married for 56 years. Mary... View Obituary & Service Information

The family of Mary Lou Dixon Taylor created this Life Tributes page to make it easy to share your memories.

Mary Lou Dixon Taylor, 91, who was a long-time resident of Provo,...