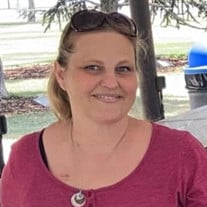 Mary Nicole (O’Neal) Johnson, 48, battled and fought fiercely against her bout of cholangiocarcinoma. She succumbed to the cancer the morning of December 24, 2021. The youngest of three kids and the only girl, Nicole was born in Salt Lake City, Utah on September 20, 1973, to Jerry A. and Mary (Mecham) O’Neal. Nicole spent her early years in Tooele prior to moving to Orem. Leading an eventful life, she started a family young and had two children. Her children were her greatest source of pride, happiness, and her primary focus. Throughout her life she had an eclectic skill set and a variety of jobs fitting the part. Her favorite being a homemaker and raising her two children and later, in turn, helping raise her grandson. Nicole had a quiet strength about her and was a private person, allowing a few to come into her circle. She had an amazing sense of responsibility and work ethic which she passed down to her children. Always putting others needs before her own, she did not want to be a burden to anyone, even in death. She was preceded in death by her parents and recently, her oldest brother, Stephen A. O’Neal. She is survived by her favorite daughter, Elizabeth Ainsworth; fortitudinous son, Cole Ainsworth; precocious grandson, Aaron Ainsworth; charismatic brother, Rawley O’Neal; loving sister-in-law, YuVonka O’Neal; along with several cousins, nieces, and nephews. Family and those close enough to be friends are invited to join in a celebration of Nicole’s life. A brief memorial service, (per her wishes) followed by a luncheon will be held at 11:00 a.m., Saturday, January 15, 2022 at the Main Street Chapel, 1405 North Main Street, Orem, Utah 84057. An interment at Orem City Cemetery will follow. Condolences/flowers may be sent to 308 W. Amiron Way Apt. C, Orem, Utah 84057 or expressed online at www.bergmortuary.com. Charitable contributions may be made to The Cholangiocarcinoma Foundation.

Mary Nicole (O&#8217;Neal) Johnson, 48, battled and fought fiercely against her bout of cholangiocarcinoma. She succumbed to the cancer the morning of December 24, 2021. The youngest of three kids and the only girl, Nicole was born in Salt... View Obituary & Service Information

The family of Mary Nicole (O'Neal) Johnson created this Life Tributes page to make it easy to share your memories.