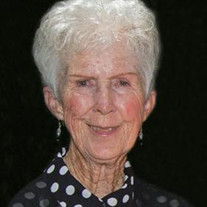 Mary Braun Norman, age 76, beloved wife, mother, grandmother, sister and friend, passed away peacefully Thursday morning March 2, 2017, of complications from surgery. She was born July 31, 1940 in Provo, Utah, the daughter of Iona Louisa Carter. She graduated from Provo High School in 1958. On February 12, 1960, Mary married the love of her life, Charles E. Norman, in Orem, Utah. They were married for 47 wonderful years. Charlie passed away on March 17, 2007. In her younger years, Mary followed her brothers to the old Timpanogos Golf Course where she learned to play. She had a great love for the game, something that she passed on to her children and grandchildren. Over the years, Mary won multiple club championships and recorded 18 hole-in-ones. She developed countless lasting friendships with the Timpanogos, East Bay, and Hobble Creek Ladies Associations. There wasn’t anything about golf she didn’t like, except slow play. Mary was not only an example on the golf course, but more importantly in life. She taught us many valuable lessons, and will be dearly missed. Mary was preceded in death by her husband, Charlie; she is survived by her son, Craig (Laina); daughter, Terry Hansen; four grandchildren: Nick (Katie), Paul, Meg and Alec; sister, Norma Turner; and her brothers, Sonny Braun and Jerry (Linda) Braun. We would like to thank Pam, Mikel, Kristi and Kim, nurses at Utah Valley Hospital, as well as the staff at East Bay Golf Course for taking such great care of our Mom. Graveside services will be held at 1:00 p.m., Monday, March 6, 2017 in the Spanish Fork City Cemetery, 400 East 420 South, Spanish Fork, Utah. Friends may call at Berg Mortuary, 185 East Center Street, Provo, Utah on Sunday, March 5, from 6-8:00 p.m. and at the mortuary on Monday morning from 11:30-12:30 p.m. Condolences may be expressed at www.bergmortuary.com.

The family of Mary B. Norman created this Life Tributes page to make it easy to share your memories.

Send flowers to the Norman family.