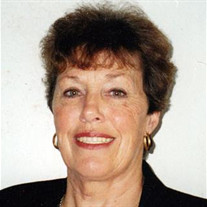 Mary Elizabeth Saldutte was a “force of good” to all those who knew her. We sadly announce that Mary passed away on Saturday morning at 3:15 A.M., November 29th, over the Thanksgiving weekend at the home of her youngest daughter, Robyn Green. She was surrounded by her loved ones. It was appropriate that she went “home” during the Thanksgiving weekend as all those she knew had gratitude for the blessing she was in their lives. Mary was born to Robert Basil MacWhirter and Mary Beatrice Harrison, in the beautiful town of her ancestors, New Richmond, Quebec, Canada on February 18th, 1931 to a family of 6 brothers and one sister. She married Samuel Saldutte, in Toronto, Canada on September 20, 1951 after a yearlong courtship through love letters while Sam sailed back and forth from South Africa as a Merchant Marine officer. Sam left the sea for Mary to move to the Philadelphia area for the next twenty-six years to raise a family of 4 children. She worked part time as a journalist for the local paper and later as a part time manager for Alvinos Italian restaurant where she learned many of her great Italian recipes. It was a “family affair” in that her 3 teen children also worked there. At the age of 42, Mary pursued a lifelong dream to become a nurse where she graduated as the valedictorian of her class. In 1977, as a modern day LDS pioneer, she came “across the plains” in a 1972 Ford LTD with her son Jack, daughter Robyn, and grandson, Stephen. She settled in Provo, Utah where she found her “Zion” in the Pleasant View 1st Ward for 36 years. Working at Utah Valley Hospital became part of her mission as she served thousands of intensive care patients over the years and gained the reputation for innovative patient care receiving the “Team Member of the Year” award in 1989. She loved her 17 grandchildren and 23 great-grandchildren who called her “Nana” and considered her the “coolest” and “youngest” grandmother ever. As a faithful convert she served as Primary President, Young Women President, in the Relief Society Presidency and many other callings over her lifetime. She was known for her “Christmas Eve” pageant that she faithfully directed for 27 years in her ward. Mary also served two missions for The Church of Jesus Christ of Latter-day Saints, one to Vietnam and one to Vancouver British Columbia, Canada. She is survived by her four adult children – Dawn Schween of Gilbert, Arizona, Douglas Saldutte of Cuenca, Ecuador, Robyn Green of Orem and Jack Saldutti of Gilbert, Arizona. Funeral services will be held at 11:00 a.m., Tuesday, December 2, 2014 in the Pleasant View 1st Ward Chapel, 650 East Stadium Avenue, Provo, Utah. Friends may call at the Berg Mortuary of Provo, 185 East Center Street, Monday, December 1 from 6-8:00 p.m. and at the church Tuesday from 10-10:45 a.m. Interment, Provo City Cemetery. Condolences may be sent online at www.bergmortuary.com. In lieu of flowers the family suggests donations to the LDS Humanitarian Fund.

Mary Elizabeth Saldutte was a &#8220;force of good&#8221; to all those who knew her. We sadly announce that Mary passed away on Saturday morning at 3:15 A.M., November 29th, over the Thanksgiving weekend at the home of her youngest daughter,... View Obituary & Service Information

The family of Mary Elizabeth Saldutte created this Life Tributes page to make it easy to share your memories.

Mary Elizabeth Saldutte was a “force of good” to all those who...

Send flowers to the Saldutte family.